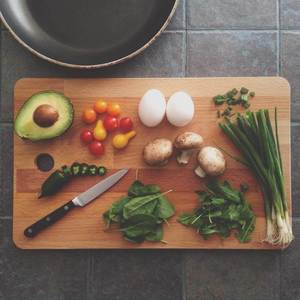 With an abundance of spare time due to our shelter-in-place orders, I have started experimenting with some new recipes. Below are some dishes I have made so far during my time at home. As a vegetarian with a brother who’s allergic to milk products, I have picked dishes that can be easily adapted to accommodate a variety of dietary restrictions. These recipes all use common ingredients that should still be available at most grocery stores.

I had been craving stuffed bell peppers for almost a week before I finally made these. These peppers gave me everything I had desired — the flavors of the red sauce-infused filling were complemented by the pepper on the outside. The recipe requires more time and preparation than I expected, but it was worth it. That said, I made several changes to the original recipe. I used ground turkey instead of beef, and to make my own vegetarian pepper, I used the rice mixture without the meat as filling. Despite those alterations, I did not notice an absence of flavor or quality. This was not a particularly spicy dish, but I did not find that to be a detriment either. Additionally, I added the cheese to the top of the peppers after uncovering them so that the cheese had time to melt while still in the oven. I would make these again without any additional changes.

Cut a thin slice from the stem end of each bell pepper. Remove seeds and membranes; rinse peppers. Cook peppers in boiling water to cover; about five minutes; drain. Cook ground beef and onion in a 10-inch skillet, stirring occasionally, until beef is light brown; drain. Stir in rice, salt, garlic salt and one cup of the tomato sauce; heat until hot.

This recipe is super simple, easy and quick to make. Given my own preferences and the limited options available at the grocery store, I used different vegetables than the ones listed in the recipe, but it turned out delicious anyway. I used broccoli, frozen carrots, potatoes, spinach and bell peppers. This changed the cooking times slightly, but other than adjusting that, any vegetables would work great in this dish. In addition, I added a lot more curry powder than the recipe calls for, as well as some turmeric and chili powder to give it more flavor. Paired with some rice, this curry was good as dinner and as leftovers. In the future, I would add even more seasoning, because while it was good, I still found it a little bland.

From Forks Over Knives (recipe here)

Back at Notre Dame, I frequently made quesadilla-style wraps on the panini makers in North Dining Hall, filled with many of the same ingredients in this recipe. This time, I chose to use fresh greens from my family’s garden instead of the spinach that the recipe calls for — any greens that you have on hand would work great. As with the curry, I added more seasoning than was listed: I more than doubled the chili powder, added extra onion powder and cumin and sprinkled in some Tapatío. I did not have a jalepeño to include, otherwise I would have included that as well. The resulting vegan quesadillas had a nice crisp tortilla on the outside filled with a tasty combination of bean and sweet potato flavors inside. Without the extra spice, though, I think they would have been a little bland.

A super simple and easy recipe, this produced a meal that tasted, smelled and looked great. I paired these lettuce cups with green beans with a garlic sauce from Pickled Plum and white rice. The green beans were a tasty addition to the meal. Both recipes were easy to follow; they just require lots of vegetable-cutting in preparation for cooking. Although the lettuce cups were a creative presentation, my family and I found them to be cumbersome, especially with the whole slices of cucumber. When I make this recipe again, I will forgo the lettuce cups and instead make the dish into a bowl, with the cauliflower and additional toppings on top of the rice so that it is easier to eat and the sauce can seep into the rice.

Mediterranean food is one of my favorite cuisines, but it’s hard to find a good falafel. With my family’s go-to Mediterranean restaurant temporarily closed, I decided to try making a baked version of them myself. These were not as good as freshly fried ones from a good restaurant, but they were much better than alternative mixes and lesser quality varieties. The recipe itself is super simple: You put everything in a food processor or blender and blend it up. I changed it slightly by making the falafels in the traditional ball shape rather than a patty, which extended the cooking time. Along with the falafels, I made homemade pita, which was also super simple and fun to make — the pita puffed up like balloons in the oven. I used a recipe from the Food Network, though I’m sure most recipes are similar. If you are to make pita, be aware that it is best fresh and becomes stale very fast. We had some extra pieces that I made into pita chips, which were a delicious use of otherwise stale pita. I also made a Tzatziki-style sauce from Greek yogurt to dip the falafel in and put together a salad for the side. I wanted the meal to be as fresh and homemade as possible, but I decided that store-bought hummus and baba ganoush would suffice, though I would love to make them from scratch in the future.

I typically bake more than I cook, so I would be remiss if I didn’t include at least one baked item on this list. Although these are a traditional Easter food, this year was the first time I made them. Not having set expectations for these buns, I found them to taste good but be rather dense (though, that may be due to unintentionally inconsistent rising times). They had a spiced, cinnamon flavor and a light sweetness to them. I normally make more savory breads like sourdough, baguettes and boules, so this was a nice change for the holiday. In comparison to other breads, this was very quick to make — it only took several hours in the afternoon, with much of that time being inactive. The hardest part of this recipe was finding all-purpose flour at the grocery store; it took my family several weeks to find some so that I could bake these. Although these may not be a go-to bread recipe for future meals, they were a delicious and novel addition to the Easter table.