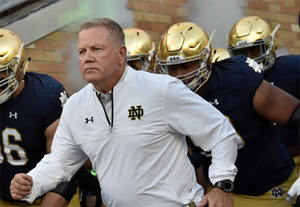 As a rollercoaster of a season ended with one last adrenaline rush brought on by one hand of Miles Boykin, Notre Dame fans have plenty to think about throughout the offseason. Brian Kelly’s team secured its 10th win of the season, just one year after finishing 4-8. Silencing many of the critics calling for his job, Kelly still enters this offseason with questions that need to be answered.

Playing a larger role due to three missing receivers, Boykin scored a 55-yard touchdown with 1 minute and 28 seconds remaining to seal the 21-17 Irish win in the Citrus Bowl and to put an exclamation point on an otherwise bleak final third of the season.

The New Year’s Day win proved Kelly can still prepare his team to beat a quality opponent in the postseason and away from home. He was able to rally his defense to stop a talented running back in LSU’s Derrius Guice and managed to call upon his offense to come up with a clutch score.

Despite the promising performances of the defense and of Boykin, the Citrus Bowl left Kelly once again in the midst of what seems to be a quarterback controversy. Toward the end of the first half, Kelly replaced junior starting quarterback Brandon Wimbush with sophomore Ian Book. Wimbush had started the game 3 for 8. Book led the Irish offense down the field in a two-minute drill to end the first half with a field goal to break the game’s 0-0 tie. The sophomore would remain in the game, completing 14 of 19 passes for 164 yards. Book threw one interception and two touchdowns while also running for another 64 yards. Earlier in the season, Book filled in for an injured Wimbush against North Carolina and led the Irish to a 33-10 win on 146 yards passing.

Wimbush performed well but not consistently this season and his early exit from the Citrus Bowl may have been partially due to a spell of migraines he suffered all week, according to The South Bend Tribune. Nonetheless, there is already talk of Book vs. ‘Bush in the Notre Dame twittersphere and beyond.

Kelly himself did not provide an answer when asked by The Indianapolis Star who his starter would be next year. “We’re very talented at the quarterback position,” Kelly told the Star. “Ian showed [Monday], Brandon showed that he’s very capable of running. He had 30 touchdowns this year — 30 touchdowns. So we are just very deep at the quarterback position and very fortunate that we have him.”

Choosing between the two quarterbacks may be the least of Brian Kelly’s issues to address this offseason. In the week following the Citrus Bowl win, a number of key departures were announced. Chief among them was stellar defensive coordinator Mike Elko’s.

Elko left Notre Dame for the defensive coordinator position at Texas A&M under new head coach Jimbo Fisher. The estimated $1.8 million a year A&M is paying and the chance to coach an SEC defense lured the coordinator away after just one year in South Bend.

In that short stay, Elko created a defense almost unrecognizable compared to last year’s, with the same core group of players. His schemes, along with his energy, turned the Irish into a good defense — if not a great one.

With Elko gone, Kelly’s biggest concern is recreating that success with Clark Lea. Lea coached the linebacker unit in 2017 during his first season with the Irish. He coached under Elko at Wake Forest and Bowling Green. Lea’s biggest challenge in replacing Elko will be remaining schematically consistent in the short term while developing his own legacy.

Elko’s is not the only departure that will hurt. We knew seniors such as captains Mike McGlinchey, Nyles Morgan and Greer Martini had played their last game. We knew senior walk-on and hypeman Sam Bush would no longer grace the sidelines, but there are a few names that unexpectedly won’t be returning.

Wide receiver CJ Sanders decided to seek a graduate transfer release. His presence will especially be missed on special teams, where he earned just over 2,000 yards as a kick returner.

These two were among the team’s top playmakers and, in order to replace them, a variety of players need to step up. Boykin showed his ability to do so in the Citrus Bowl, while Adams’ replacement will reveal itself in time.

Dexter Williams and Tony Jones Jr. are certainly on the list of possible replacements and earned some yards of their own this season, 360 and 232 respectively. Running backs Deon McIntosh and CJ Holmes also showed spots of promise throughout the season. The team’s third leading rusher McIntosh broke team rules while Holmes and promising wide receiver Kevin Stepherson were charged with shoplifting. All three were dismissed from the team on Jan. 15. Redshirt defensive lineman Brandon Tiassum was also cut from the team after the bowl game.

These four departures leave ND with 84 scholarship players on the roster, one below the NCAA maximum, as the Irish look to add three more recruits before the Feb. 7 late signing day.

Here we are again at the start of another long winter in South Bend. This time last year we were left with piles of questions to be answered by Brian Kelly’s program. Ten wins and 12 months later, we have some of our answers but also a few more nagging questions. Only a few months until the Blue Gold game!