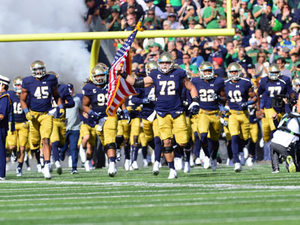 Hopes were high as quarterback Malik Zaire settled in under center and running back Tarean Folston lined up deep in the backfield as the Irish kicked off their season on Sept. 5.

The Irish faced Texas, held a No. 11 preseason ranking and set their eyes on the College Football Playoff. Pundits and talking heads across the nation considered Zaire a Heisman candidate, predicted Folston to have a 1,200-yard season and believed the Irish offense would be among the best FBS schools.

Soon after that first snap, all expectations flew out the window.

Down went Folston in the first game. Zaire and tight end Durham Smythe were lost in the Irish’s second contest with Virginia. By season’s end the offense looked drastically different.

Despite the loss of their starting quarterback, running back and tight end, Notre Dame remained a national contender behind the preparedness of once back-ups DeShone Kizer, C.J. Prosise and Josh Adams and the consistency of star receiver Will Fuller. Without these players, Notre Dame’s hopes could have ended under the constant injury plague.

The duo of the senior Prosise and freshman Adams sparked the ground attack that at the end of the season averaged 207.6 rush yards a game. The passing offense was led by Kizer’s 19 passing touchdowns, 11 of which were caught by Fuller.

To call the Irish offense prolific would be somewhat an understatement.

The first electric moment sparked after the Zaire injury, the season’s low point, in the Virginia game. Kizer entered the game as a redshirt freshman quarterback with no game experience. He exited as a hero after throwing a game-winning 40-yard touchdown to Will Fuller with 12 seconds left.

“I've been ready for a while. I have no doubt in my ability to be the quarterback for Notre Dame,” Kizer said after the game.

Kizer to Fuller became a familiar connection as the season progressed, connecting for three TDs of at least 70 yards, but that first score was special.

"It's a crazy feeling. Time just freezes when the ball is in the air, it's crazy," Fuller said of the play.

Notre Dame scored more than 20 points in every game except for the Shamrock Series match-up with Boston College and gained at least 400 yards in 12 of its 13 games. Wake Forest was the only defense to hold the Irish under 400 yards.

ND’s offense still managed to break free from the Deacons’ defense and break a few records while they were at it.

In the second quarter of the Nov. 14 contest, Adams ran right from the Notre Dame 2-yard line. He stopped running in the end zone with a touchdown and the longest run from scrimmage in Notre Dame history.

"It was just great blocking all around from the team. It was blocking down the field and initially by the offensive line as they tried to dominate the front. I was basically just trying to do my job, do what I could and read the holes correctly,” Adams said.

“He is a young man that, you know, runs tough, physical, between the tackles, and has size, strength and speed,” Head Coach Brian Kelly said of Adams. “He's got all those things, and he's only going to get better. It's nice to see a true freshman out there competing at that level.”

Adams is just one of the many examples of Notre Dame players who were ready to step up when the team needed them.

There is a saying among sports aficionados and analytics gurus that numbers never lie. This year, Notre Dame scored at least one rushing, passing and return touchdown of at least 80 yards for the first time in school history.

The 98-yard and 91-yard rushes from scrimmage came from Adams and Prosise, respectively. Kizer added an 81-yard bomb to Fuller. And freshman C.J. Sanders returned a kickoff 93 yards for a touchdown. The Irish tied for first in plays from scrimmage of 70 or more yards.

After Adams’ record breaking run, Kizer described the offense’s goal in the simplest way possible, “We're a type of team where we strive and we try to go out and get some explosive plays,” he said.

The 2015 Notre Dame offense made explosive play after explosive play; it didn’t matter who was on the field. Team 128 hopes to do the same next fall.