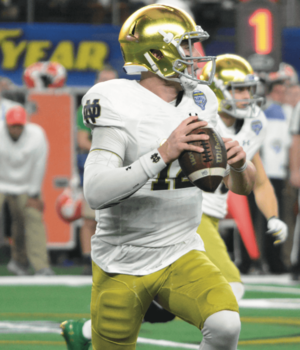 Before the start of the season, the most publicity that junior quarterback Ian Book had seen was students chanting “We want Book. We want Book.” By the end of the season, Book was the starting quarterback for the Irish, earning himself a place on the front cover of Sports Illustrated, a No. 5 national ranking in the final Associated Press Top 25 poll and numerous awards.

Before his first start of 2018 against Wake Forest, Book remembers talking to quarterbacks coach Tom Rees. “He [Rees] said, ‘Look, this is what you dreamed of doing,’” Book recalled. “‘You came here to be the starter. Don’t change anything. Keep doing what you’re doing. It’s gonna be an awesome day, an awesome time for you. Go out there and have fun.’”

Book dominated each game, relying on support from his coaches and teammates to step into a leadership role and defeat a challenging lineup of opponents. Helping to ease his transition was offensive lineman Sam Mustipher, who is also Book’s next-door neighbor and a close friend off the field.

“Coming in, you want to prove yourself to the guys and show what you can do,” Book said. “Having Sam who automatically has your back when you come in, it’s a huge confidence boost. It shows his leadership.”

With Mustipher as a role model, Book worked throughout the season to develop his own role as a leader for the team.

Although the Cotton Bowl may not have given Notre Dame the victory for which it longed, Book sees every game as an opportunity for growth. The challenges that each opponent brings make the sport fun and worthwhile, regardless of the outcome.

“You want to be the best and sometimes it doesn’t turn out the way you want it. Or sometimes you want certain plays back,” he admitted. “Just being able to learn and adapt to that, that’s probably the most challenging thing. But that’s football, and that’s the best thing about it. You have so many things you’re able to look at and get better at.”