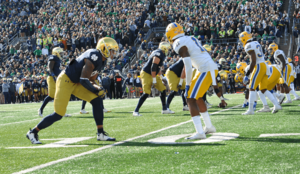 Imagine, for a moment, if at the beginning of the 2018 season the storyline come mid-October was “the undefeated, fifth-ranked Notre Dame Fighting Irish battle through to win their toughest game of the season against a .500 Pittsburgh Panthers team.” In a season full of wonderful surprises and expectations exceeded, that was the story on Oct. 13. The Irish prevailed 19-14, and it was just as uncomfortable as the scoreline indicated.

The Irish got the ball first, and after completing his first four passes, junior quarterback Ian Book was sacked for a loss of 16 yards, stalling the drive and forcing a punt. Pittsburgh took the football 88 yards on 17 plays, burning nearly 10 minutes of clock and taking a 7-0 lead. It was the first time that Notre Dame had been down by a touchdown all season, and just the second time trailing at all.

The first quarter ended with Notre Dame having mustered just 45 yards of total offense and zero points. The Irish bounced back in the second quarter thanks to Justin Yoon’s two field goals, and the score going into the half was Pittsburgh 7, Notre Dame 6. The Irish had just 22 yards on the ground in the first half, only a week after Dexter Williams torched the Virginia Tech Hokies for 178 yards and three touchdowns.

The second half would not start any better, either. Maurice Ffrench took the halftime kickoff 99 yards to the end zone and made it a 14-6 game. Notre Dame’s ensuing drive ended with an interception, Book’s second of the game. But that’s where the funny business ended. Book would complete his next nine passes of the third quarter, including a 16-yard connection to Chase Claypool that cut the Panthers’ lead to 14-12 with 2:09 to go in the period.

Pittsburgh missed its second field goal of the game, this time from 36 yards out. Book was 4 for 4 in the fourth quarter, including an inch- perfect pass to Miles Boykin for a 35-yard touchdown that gave the Irish the lead for good.

Pittsburgh would have two drives to try and reclaim the lead, but both ended in failed 4th-down conversions. The first was a fake punt on fourth-and-4 that gave the Irish the ball back with three minutes left, but Notre Dame’s possession stalled after just 59 seconds, giving the Panthers one last shot. Kenny Pickett was hounded and eventually sacked by junior defensive end Khalid Kareem, setting up second and long. Two incompletions and an illegal forward pass penalty later, it was fourth-and-29. Pickett’s pass was caught but out of bounds, and the Irish held on to move to 7-0. Next up: a rivalry showdown in San Diego with the United States Naval Academy.