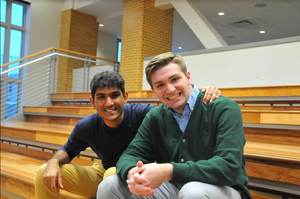 More than any other team running for Student Body President and Vice President, Noble Patidar and Connor Patrick have prioritized creating a feasible platform.

“Our platform is specifically different from the other platforms in that we’re looking at feasibility as well as importance,” Patidar said.

Patidar is a junior finance and political science double major living in Keough Hall. Patrick, a freshman living in O’Neill Family Hall, is undecided but hopes to major in music and peace studies. Both self-identifying as “natural extroverts,” the pair demonstrates that even hall rivals can partner up.

“I care enough about the rivalry to have fun with it, but it’s not actually a rivalry,” Patidar said. “It’s just for fun.”

Their platform is made up of four sections: campus presence, student well-being, sustainability and inclusion. Within each section, their policies are ordered by importance.

“The average Notre Dame student does not know the day-to-day activities of student government,” Patidar said. “Not even close.”

The ticket promises a monthly student government newsletter that circumvents the tidal wave of newsletters filling up students’ inboxes. Instead, their newsletter would be posted in classrooms and bathrooms. Email services would be optional rather than automatic.

“We’re tying everything back to having that campus presence,” Patrick said.

This policy naturally aligns with their commitment to transparency, which they hope to accomplish by hosting town halls in each dorm.

The second point of their platform on student well-being is largely about spreading awareness about existing resources and policy on campus.

Notably, Patidar and Patrick support the implementation of Callisto, a software reporting service for sexual assault survivors. While they recognize that Callisto has implementation issues due to its incompatibility with a tri-campus network, they view the service as an important first step.

“Other schools have this,” Patidar said, citing the University of Southern California. “So it’s not impossible.”

Their sustainability section focuses on awareness as well and also includes pushing the university to install motion detection lights in dorms and encouraging dorms to sell reusable tumblers.

“I love my chai tea lattes,” Patrick said. “And it adds up.”

“If O’Neill had these, I’d buy one right away,” Patrick said.

Patidar and Patrick’s section on inclusion is the most thorough and ambitious of their platform.

“I live and breathe diversity and inclusion every day,” Patidar said. “So this was super important to our platform.” Both candidates are the diversity commissioners for their respective dorms.

Patidar and Patrick also promise to facilitate a Converge event on campus in light of the upcoming 2020 presidential debate that will be hosted at Notre Dame. This event would pair students up with opposing political viewpoints to provide the opportunity to engage in healthy discourse.

The platform explicitly supports the inclusion of gender identity and sexual orientation in the Notice of Non-Discrimination in du Lac, which is currently not required by Indiana State law.

“Connor and I believe one hundred percent that this should be a part of the Non-Discrimination Clause, but not everybody does,” Patidar said.

As a unique aspect of this platform, Patidar and Patrick propose a religious Converge-style event and other programming for students with different religious identities. They also propose a campus festival that celebrates multiculturalism.

The strength of this platform ultimately lies in its feasibility, as Patidar and Patrick have managed to pinpoint achievable goals under each of the sections outlined.

Their primary focus is on awareness campaigns and increased programming, both important elements of student government.

Pushing back against any claim that they’ve sacrificed ambition for feasibility, Patidar and Patrick continued to emphasize their commitment to being present on campus while also being realistic about the capacity of student government.

Patidar and Patrick’s platform, and by extension candidacy, is approachable, clear and practical. Their personability is immediately evident and their commitment to inclusion and diversity distinguishes their ticket from other platforms.