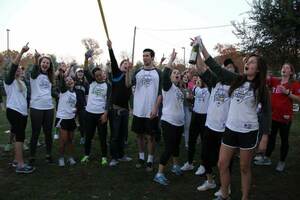 The public feud has subsided between the University of Notre Dame and neighbors on a street landlocked by campus. But bitter feelings remain.

Palmer Street is a quiet, residential street at the edge of campus. Sandwiched between the Bulla Street parking lots and the Fischer Graduate Residences, it’s a strip of privately owned property surrounded by Notre Dame’s campus.

The university’s newly proposed parking lot adjacent to Palmer Street sparked a weekslong battle between neighbors and the university. After a series of contentious County Council meetings — and a deluge of local media coverage — neighbors won a small victory. Though Notre Dame still plans to install a parking lot adjacent to their homes, it will no longer route traffic down Palmer Street. The new plans were approved in a meeting Feb. 8 of the St. Joseph County Council.

“We’ve been around forever, and it’s like they don’t know us.”

The family of Teresa Smith, 69, has lived on Palmer Street since before Notre Dame Stadium was built in 1930. Their connection to the university, too, runs deep. But the family says it has often felt ignored by Notre Dame officials.

“We’ve been around for forever, and it’s like they didn’t know us,” Robert, Teresa’s husband, said.

Teresa’s grandparents were Hungarian immigrants who settled in South Bend. Like other immigrant families, they were drawn to Palmer Street — an affordable neighborhood with work nearby, Teresa Smith said.

Teresa’s mother, Donna Marozsan, and her aunt, Adeline “Addie” Marozsan, were switchboard operators at Notre Dame. Her grandmother, Mary, was a maid on campus. Her grandfather, John, was a campus groundskeeper. His picture was featured on the cover of the Notre Dame Scholastic on Oct. 20, 1950.

But the Marozsans always felt removed, in a way, from the Notre Dame students and faculty. There was something of a class divide between Palmer Street and campus, Robert Smith said.

Addie, 92, still lives in the Palmer Street home that once belonged to her husband’s parents. Attending Notre Dame seemed out of the question for her husband, Stephen, Addie said.

“It was considered for rich people,” she said.

Teresa Smith moved to Palmer Street when she was 6 years old. Her father built a house, which Teresa and Robert Smith now own, across from Teresa’s grandparents.

Over the years, Teresa has watched Notre Dame grow around Palmer Street. She still remembers coming home from church and seeing a big hole in the ground where the Hesburgh Library was being constructed.

The Smiths eventually purchased Teresa’s childhood home. Though they live down the street, they still use the house for weekly prayer meetings. They rent it out during the football season to pay the bills.

Over the years, the Marozsan-Smith family has watched residents come and go. The relationships they developed on Palmer Street, though, have endured.

Nikki Micelotta only wishes she had more time on Palmer Street.

“It was just the best time in the world,” she said.

The house full of six young women quickly became a fixture of their small neighborhood, befriending their elderly neighbor and eating pizza dinners with the couple down the street.

In the fall of 2016, they founded a Palmer Street wiffle ball league, complete with official “Palmer Street” baseball shirts. Addie Marozsan, 87 years old at the time, threw the opening pitch of the spring season.

Games were held every Friday — first in their backyard, then in an empty lot across the street once the league grew bigger.

“It’s now going to be a parking lot,” Smith said.

Seeing the proposed development, and all the bulldozed trees, Micelotta was reminded of the scene from “Up,” when the old man’s residential house is surrounded by construction crews and new development.

“It feels like the inevitable march of the university, keeping the expansion going. I love Notre Dame, obviously — we’re alums,” Kelly said. “But you just wonder if there are better ways.”

Greg Ettl has lived on Palmer Street for nearly 20 years. He owns two houses next door to each other — one he lives in, the other he rents to college students. He sold a third property to new owners in November.

In an email, Ettl said Notre Dame’s parking lot development “appears to me a blatant attempt to make us extremely uncomfortable and at the same time drive down our property values.”

“They clear-cut everything,” Smith said. “And why? Because I think they wanted to cause us grief."

Ettl said he has spoken with Rich Bellis, Notre Dame’s associate vice president for finance and treasury services, about potentially selling his property to the university. “[B]ut his nature appears to be one of practicing financial frugality,” Ettl wrote.

Ettl added that, in their conversations, Bellis seemed to imply that the university planned to wait him out.

Palmer Street residents – or, in the case of Dr. Smith, owners, since he is not a resident –

making generous offers for their properties, keeping them apprised of university plans and

listening to their concerns. We responded to those concerns by revamping the entrance and exit

plan, a solution that Dr. Smith publicly praised and that was overwhelmingly approved by

county officials, and will enhance the street’s landscaping by planting rows of evergreen trees to

shield the residents from the parking lots.”

Shannon Duggan, 29, and her husband, Michael Duggan, 30, are Notre Dame sweethearts. Both graduated with their bachelor’s in 2014. Shannon is a “Double Domer” — a 2018 graduate of Notre Dame Law School.

The couple wanted to buy a property of their own in South Bend, somewhere they could stay during football game weekends and host their friends. While scrolling on the real estate app Zillow, they saw a listing for a house on Palmer Street, Shannon Duggan said.

“And we were like, ‘What even is this?’ Because we didn’t even know Palmer Street existed when we were students. It’s so hidden,” she said.

Even after visiting the property, the Palmer Street location seemed “almost too good to be true,” Duggan said.

While they were working out an offer through real estate agents, the Duggans learned of Notre Dame’s proposed development plans. They decided to go through with the purchase anyway.

“In our opinion, it’s invaluable what we were able to get,” Shannon Duggan said. “We’re young. We go to games all the time.”

In Detroit, they live in an apartment building and don’t have a close community of neighbors, she said. The tightknit community on Palmer Street is something new for the couple — and a real bonus.

“I think that’s another part of the value,” Shannon said. “It’s a really great community, and they care so much about Palmer Street.”

As the Duggans settled into their new house, Notre Dame was moving forward with its development — clearing trees and preparing the grounds for a parking lot.

“We really do care about the neighbors we have on Palmer Street, and obviously we love Notre Dame,” Shannon Duggan said. “So we’re just kind of there with those feelings.”