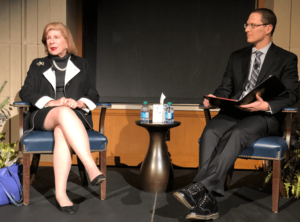 Totenberg began covering the Supreme Court in 1975, when most cases involved the Vietnam War draft and protests, obscenity, civil rights and school desegregation. During her early days, she relied on reading and asking questions in order to learn about the legal system — a topic about which she knew little at the time.

“I just made myself into a sponge as much as I could. I was just fearless in asking questions and if I didn’t understand something, I just asked,” Totenberg said. Among those whom she questioned were the justices themselves, who would speak with her for upwards of an hour at a time.

“I just called up justices and said: could I come by and see them? Most of them said yes. I didn’t ask them anything secretive. I asked them how they did their job. I asked, how are opinions assigned? I just asked the most elementary questions.”

In 1977, Totenberg broke the story of the secret Supreme Court deliberations regarding the Watergate scandal. A decade later, she caused Supreme Court nominee Douglas Ginsberg to withdraw after she covered his use of marijuana. Her 1991 coverage of Anita Hill’s sexual assault allegations against Judge Clarence Thomas led the Senate Judiciary Committee to re-open his confirmation hearings.

“To me, the most important case I covered as a young reporter was undoubtedly the Pentagon Papers case. It meant the most to me — the idea that the federal government could prevent publication of something that was essentially a historical document by making it classified,” she said.

The several decades she spent covering the Supreme Court gave Totenberg the knowledge to establish opinions of her own. When Kozel asked her whom she could envision as a chief justice, Totenberg’s answer was certain: “Merrick Garland.”

After several moments of laughter and applause from the audience, she continued: “Even if you love the nominations of Neil Gorsuch and Brett Kavanaugh, you can’t look back at that 10 months and say it was fair. It wasn’t fair. It had never been done before, not for that length of time. And it will be done again. We will all pay the consequences for it. And the court will pay the consequences for it.”

On a less serious note, Totenberg also discussed her family and childhood. Totenberg recounted the story of her father’s stolen Stradivarius violin. The FBI recovered it 35 years after its mysterious disappearance during a performance. Upon repossessing the instrument, the Totenbergs ensured that it went to another violinist with a similar passion for music.

“There are different styles of everything law, science and violin playing,” Totenberg said. The new violinist’s style mimicked that of her father, who had passed away several years prior. Hearing that same style, years after her father’s death and decades after the violin’s disappearance, Totenberg found its beauty to be “heartbreaking.”

At the end of the discussion, Totenberg emphasized that it’s not important to focus on money or on winning; it is better to focus on making the biggest impact in ways that exude the most passion.

“Don’t let the golden handcuffs lock you up. Because you may find at some point, you’re 50 years old and you’ve made a lot of money, but you don’t do anything that you really like, enjoy and personally find great fulfillment, other than winning. And winning isn’t enough,” she said. “Remember what makes your heart beat.”