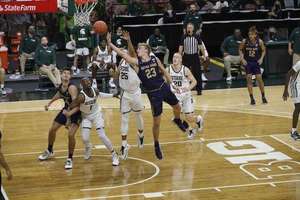 The Notre Dame men’s basketball team now sits at 9-11 overall, and 6-8 in the ACC, putting them at 11th in the conference standings. The biggest standout for the Irish thus far has been forward Nate Laszewski, who is averaging 14.7 points and 7.8 rebounds per game (both team highs) while shooting a remarkable 64.8% from the field and 51.5% from beyond the arc, ranking him 23rd and seventh respectively among shooters in NCAA Division I basketball. Guard Prentiss Hubb has added 13.7 points per game while leading the team in assists with 6.2 per game, and Guard Dane Goodwin has seen his role on the team expand and is averaging 12.5 points per game.

Despite this production, the Irish have struggled to break free from their middling record and have failed to cross the .500 winning mark at any point this season. Regular second-half woes have caused the team to struggle to safeguard big leads or allow better opponents to pull away late.

The season began with a slew of games against a collection of good teams with high expectations. The season-opener against Michigan State in East Lansing went very much as expected, with the Spartans cruising to a 10-point victory, but there were promising signs present. The Irish held a lead deep into the first half against a top opponent, and Hubb put up an impressive scoring performance with 23 points.

The following week saw two games postponed, and eventually canceled, because of COVID-19 outbreaks in the opposing teams’ programs.

After a win in the home opener against Detroit Mercy, the Irish were thrust back into the gauntlet against a series of tough opponents. Notre Dame dropped seven of their next nine to fall to 3-8 on the year. There were some bright spots for the team during this rough stretch, though: the Irish held on for their first-ever win in Rupp Arena against a revered Kentucky program after gaining a massive early lead and nearly surrendering it, but the Wildcats’ would-be game-winning buzzer-beater clanked off the rim. Other highlights include a tight loss to an Ohio State team that is currently ranked in the top five and a good performance in Chapel Hill against a resurgent North Carolina team that was marred by a loss at the buzzer.

After this tough stretch, the tide of the Irish season finally turned as they took advantage of less formidable opponents on their softening schedule. Since Jan. 13, the Irish have won six of their past nine games, including an always-welcome win against Duke at Cameron Indoor Stadium. This revival of the team’s season would have been even more impressive had the Irish not surrendered two large leads at Georgia Tech and Syracuse. These meltdowns were the consequence of blown leads of 18 and 20 points against the Yellow Jackets and Orange, respectively, and are indicative of Notre Dame’s larger inability to close out games this season.

The failure to get into a consistent winning groove has been a disappointment to many Irish fans who had hoped the late run of last year’s team would translate into a successful season culminating in a potential NCAA tournament berth. The Irish’s only hope of getting into the bracket would be a sweep through the ACC tournament in early March, which does not appear likely based on Notre Dame’s previous battles against the top of the ACC. This season would then be the fourth straight year the Irish have missed the tournament under Mike Brey.

Notre Dame will finish their season with four more ACC games, including the opportunity for a marquee victory at home against No. 11 Florida State in their final game, and then the conference tournament.

The Irish will likely return most of their core from this season, with the possible exception of big man Juwan Durham who has acted as an able complement to Laszewski down low. Irish fans are hoping that an extra year of experience will provide some depth to an Irish team that had a shallow bench at times, leading to better results next year based on the promise this team has shown down the stretch.