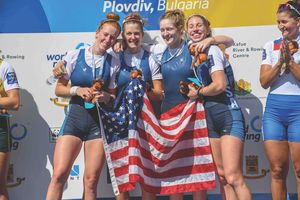 On Sept.15, Notre Dame graduates Molly Bruggeman, class of 2014, and Erin Boxberger, class of 2017, collectively known as the “Shamrock Sisters,” made history at the 2018 World Rowing Championships in Plovdiv, Bulgaria. The pair are the first ND alumnae to compete at the championship level in the same boat, and they helped the U.S. Women’s Four team claim gold in the event for the first time since 2015.

The crew, comprised of Bruggeman, Boxberger, Madeline Wanamaker and Erin Reelick, had a slow start and initially trailed slightly off the line, but they quickly made up for their lost time. By the midway point, they were already a full boat’s length ahead of Denmark, who finished in second. Australia, the defending champions of the event, finished in third. The U.S. team won with a final time of 6:25.570.

Bruggeman, originally from Dayton, Ohio, began her rowing career in 2007 with the Dayton Boat Club. Boxberger, from Overland Park, Kansas, began rowing in 2011 during her time at Notre Dame. Both women were members of the University of Notre Dame rowing team and now train at the U.S. Rowing Training Center in Princeton, New Jersey. This was Bruggeman’s third time competing at the World Rowing Championships, but Boxberger’s first.

In 2017, the U.S. team finished in fourth in the Women’s Four event. Bruggeman, a member of the 2017 team, said in her online blog that this year’s victory has been a “redemption” for her. The team entered the competition with the goal of focusing on their own teammates and ignoring the other boats during the race. This mindset seemed to set them apart from their competitors this year. Despite their slow start, they focused on working as one team and managed to close the gap between themselves and the Denmark crew.

Both Bruggeman and Boxberger have hopes of qualifying their boat for the Olympic team and competing in Tokyo in 2020. Their training in Princeton is now more rigorous than ever, and Boxberger said that the key to preparing for their competitions “is actually pretty simple and it doesn’t involve any magic equation ... but it does take a lot of time on the erg and on the water.” The Notre Dame community will certainly look forward to watching the Shamrock Sisters as they continue to make rowing history in the years to come.