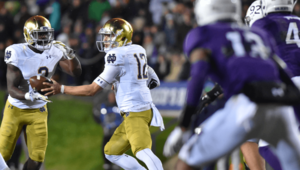 Following a decisive win in San Diego against Navy, the Irish hit the road once again
for a primetime matchup against Northwestern. The unexpected leaders of the Big Ten West division, the Wildcats entered as underdogs, hoping to spoil Notre Dame’s undefeated record and playoff hopes. The two teams took the field at Ryan Field in Chicago, which proved to be nearly a neutral site with an abundance of green in the crowd. Although Notre Dame was favored by two scores, Northwestern hung in the game due to an inconsistent running game and special teams mistakes by the Irish.

The Irish had a lackluster performance in the first quarter. After winning the coin toss, Notre Dame elected to receive the opening kick — what would have been a smart decision to get points on the board early had it not been for Notre Dame’s weak opening drive. Junior quarterback Ian Book and senior running back Dexter Williams normally play with great chemistry, but a miscommunication on a read option play led to an Irish fumble, recovered by the Wildcats. A strong defensive showing by Notre Dame, however, forced a 39-yard field goal attempt that Northwestern missed.

Despite early mistakes, the Irish offense took the field again in the hopes of establishing some momentum. Notre Dame marched down the field from its own 21-yard line, going 79 yards on a 14-play drive. Williams finished it off for a touchdown, and senior kicker Justin Yoon added a PAT to make the score 7-0 with just under seven minutes left in the quarter.

The Irish defense built on the energy from the early lead, forcing Northwestern to a three-and-out. Punter Jake Collins booted the ball and Chris Finke returned it to the Notre Dame 42 for a solid field position. The ensuing drive was marred by false start and offensive pass interference penalties. Notre Dame was forced to kick a field goal, but Yoon hooked it far left, causing Irish fans to wonder if the November curse was returning once again.

The Northwestern offense rallied for some much-needed points, going 73 yards on an 18-play drive, consistently outsmarting the Irish defense at the line of scrimmage. The Wildcats ran it in for a touchdown, putting an exclamation point on an impressive drive. Going into halftime, the Irish and the Wildcats were deadlocked at 7-7.

The Wildcats received the ball in the third quarter but were forced to punt after the Irish defense held them to just 20 yards. Notre Dame received the ball at its own 20 and got back on track. In a quick opening possession, the Irish drove 80 yards, capped off with an impressive 20-yard pass to senior wide receiver Miles Boykin in the end zone. Notre Dame was up 14-7, but the Irish knew it would take lots of defensive pressure and fewer penalties to pull off another win.

Once again, Northwestern was forced to punt. The Irish were deep in their own territory, receiving the ball at their own 2-yard line. While most would play it safe and run the ball, offensive coordinator Chip Long opted for aggressive play-calling. It worked.

Book showed poise even amid poor playing conditions. He went 3 for 4 for 92 yards on the drive, slinging the ball to sophomore wide receiver Michael Young for a perfect 47-yard touchdown pass. Yoon extended the lead with a 43-yard field goal, bringing the score to 24-7.

Northwestern responded with a quick touchdown, but Notre Dame had finally found its rhythm. The Irish topped the game off with a 23-yard touchdown run from Book. With a final score of 31-21, Notre Dame tallied another win over a quality opponent.