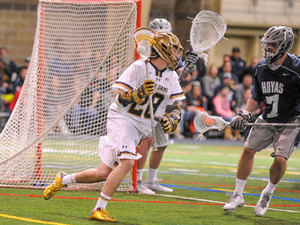 When the initial preseason rankings were released in December, Notre Dame was ranked No. 2, behind Denver. While fans were happy, the Irish say this high ranking didn’t hold much significance.

“Rankings don’t mean much to me, especially this early in the season,” he says. “Our confidence in ourselves comes from the work that we put together everyday, not from the media.”

Preparation for the 2015 season began in September and continued through the fall. Marlatt and seniors attack Conor Doyle and midfielder Jack Near were selected as captains of a highly experienced team that boasts returning players with playoff experience and the second-best recruiting class of freshmen as ranked by Inside Lacrosse. Even with all this talent, Marlatt says, nothing is certain. “We are not guaranteed anything just because of what we did last year and what players we return,” he says.

The Irish will look to capitalize on the extra year of experience in notable returners like junior attackman Matt Kavanagh and sophomore midfielder Sergio Perkovic. Kavanagh set the Notre Dame record for most points scored in a season in his sophomore year, as well as the single-game goal record (7) and the single-season assist record. Perkovic looks to repeat success from an impressive rookie season in which he scored 28 goals, the record for a Notre Dame freshman midfielder.

Perkovic is confident in the team’s ability to grow from last year. “I think overall we can surpass the success of last year with the talent we have back and the great freshman class we have,” he says. “Being a sophomore, I feel like I have a lot more experience and confidence when I am out on the field … I just want to become the most productive player I can be for the team.”

The freshman class boasts five Under Armour All-Americans and eight members within the top 70 of Inside Lacrosse’s Power 100 Freshman rankings. While the class is bursting with talent, freshman attack Mikey Wynne (No. 4 overall) says that there’s a big difference when it comes to playing college lacrosse.

“Everything’s so much quicker, and every little detail matters,” Wynne says. “Even to make the little plays, you have to work just as hard … It’s fun to go out and compete with some of the best guys in the country every day.”

Notre Dame is 2-0 following a win at Michigan and a home win over Georgetown in the season opener. Wynne got off to a quick start, netting six goals in the first collegiate game of his career, while Perkovic tallied three goals of his own in the 14-12 victory. The pair added four and two more goals, respectively, in a 17-8 win over Michigan on Feb. 21.

Looking to the rest of the season, Marlatt says that each game is significant in the playoff race. Specifically, he says that both defending national champion No. 5 Duke and No. 1 Denver pose threats to the Irish. To win a national championship, Harlatt says that the Irish need to focus on what sets them apart. “It’s the little things and locker room culture that make the difference at the end of the year,” he says.

Perkovic says that the team will have to be flexible and stay calm throughout the season if they want to improve. “The challenge for us is to be able to deal with success as well as adversity well. We cannot get too high or too low because we play great teams every week. We also have to manage expectations and not get to engrossed with preseason and early hype surrounding our team,” he says.