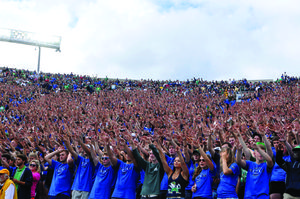 In a season of disappointments for the Notre Dame football program, the game against Nevada early in the season on Sept. 10 stands as a stark reminder of what could have been.

On the 70-degree, cloudless day in South Bend, the Irish entered with the promise of their preseason ranking of 10th in the country.

The Irish began with a scoreless first quarter, but after Justin Yoon hit a 21-yard field goal at the beginning of the of second quarter, the offense emerged from the woodwork.

In the second quarter alone, the defense forced a 3-and-out, a safety, an interception and a fruitless run for negative yardage as time expired. The offense, on the other hand, strung together three separate touchdown drives and went back into the locker room leading the Wolf Pack 25-0.

The second half of the game was a continuation of the how the first played out. DeShone Kizer, Malik Zaire and company put 14 more points on the board, and the defense that left a goose egg under Nevada’s name at half only allowed 10 points, seven of which were a futile touchdown as the game drew to an end.

The game and the W in the stat line showcased all the potential that fans believed the Irish had. The same offense that had lit up Texas a week earlier showed no signs of slowing down, and the defense that was lacking finally came out to play.

The questions after the game weren’t, “Will we break .500?” or “Should we fire Kelly?” or “Will my roommate care if I cry myself to sleep?” They were, “How are we going to deal with having two incredible quarterbacks?” and “How far up in the rankings will we move?” and “By how many points will we beat Michigan State next week?”

Despite the first quarter, in many ways, the Irish played a near perfect game. They threw for 205 yards, rushed for 239 and only turned the ball over once while only allowing Nevada three points during the competitive part of the game. Kizer and Zaire both dominated the playing field.

Kizer, Josh Adams, Dexter Williams and Tarean Folston all ran for double digits. Equanimeous St. Brown, C.J. Sanders and Kevin Stepherson all gave the Wolf Pack problems downfield. And the defense, led in tackles by James Onwualu and Te’von Coney, looked the opposite of the Swiss cheese they seemed to be the prior week.

The crowd left the stadium optimistic, hoping that Texas would be the team’s only loss this season. Nobody on Sept. 10 expected Nevada to end up with a better record than the Irish. A record of 4-8 with no bowl game seemed like something that could be in the humor section of this magazine. But that’s college football for you — unpredictable.

“[Offensively] we’re executing, we’re paying attention to detail, we’re getting everything done that we need to. But in these upcoming weeks, we need to go above and beyond and we really need to push it and become the most dominant offense in the country.”