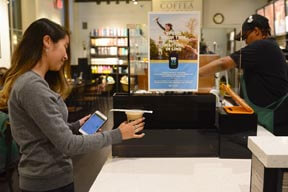 Notre Dame students know all too well the struggle of walking to class after a long night, in desperate need of a jolt of caffeine. Upon their arrival at the Starbucks in LaFortune Student Center, they see that the line stretches all the way out the door and there is no chance of making it to the barista — let alone to class — before that 8:20 lecture begins. Forlornly, they trudge on, hopes dashed.

Luckily, this problem may not continue for much longer. On Aug. 27, the university announced a new campus service called NDTOGO, accessible through the Tapingo app. With a few simple taps on a connected device, students can now order food from a variety of on-campus restaurants — from Smashburger to Star Ginger — foregoing the lines at all of the popular on-campus eateries.

Students may connect their campus cards to their accounts in order to utilize Flex Points and Domer Dollars for payment. Debit and credit cards may also be linked to user accounts for added convenience. The app informs users of estimated preparation time as well, allowing students to manage their time easily.

Although delivery is not currently available on campus, users can vote to make this option a reality in the future.

The Tapingo app is not the first of its kind. Many recent apps such as Postmates and DoorDash have tapped into the market of on-demand delivery. Tapingo was founded in 2012, initially launching its services on five college campuses: Santa Clara University, Loyola Marymount University, Biola University, the University of Maine and California Lutheran University. Since then, over 200 college campuses in both the United States and Canada have partnered with Tapingo to provide food delivery services to their students. Tapingo’s motto reads: “Wait less. Live more.” Students hope that the integration of the NDTOGO app will allow just that.