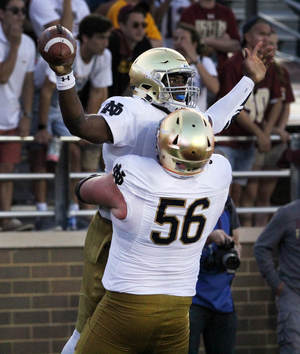 Following a heartbreaking 1-point loss to Georgia that dropped them in the rankings, the Fighting Irish shipped up to Boston College looking to bounce back. Although the Eagles had dropped their last five games against Notre Dame, head coach Brian Kelly knew his team must come ready to compete.

“Playing Boston College is always a challenge for us at Notre Dame. It’s always one that we expect their very, very best, and we get it,” Kelly said in a press conference before the game. The “Holy War,” featuring the only two Catholic schools in the FBS, packed Boston College’s Alumni Stadium with both Eagles and Irish fans alike.

The Eagles scored first with a 38-yard field goal. Notre Dame promptly responded, as junior running back Josh Adams bursted free for a 65-yard run. Junior quarterback Brandon Wimbush finished the drive with a 2-yard rushing touchdown — not the last time he would see the end zone. Adams’ run vaulted him over 2,000 career rushing-yards, and he became only the 17th player in Irish history to achieve this milestone. Boston College reclaimed the lead with their first touchdown of the game, making the score 10-7. After Adams exploded for a 64-yard gain into the red zone, Wimbush punched it in again to put the Irish back in the lead.

Following a Boston College field goal, Notre Dame’s offense unleashed three straight touchdowns. Under pressure from the Eagles defense, Wimbush took off down the sideline, beating several defenders for a gain of 46 yards, and setting up seven more points. On the ensuing Eagles possession, junior cornerback Shaun Crawford came up with his second career interception. It took Notre Dame just over 90 seconds to march 75 yards down the field, aided by another long rush from Adams. Wimbush would find the end zone for a third time, pushing the lead to 28-13. The stalwart Irish defense quickly forced a punt, putting the offense back out on the field. For a fourth and final time, Wimbush rushed to the endzone on a 65-yard touchdown. He finished the day with 207 rushing yards, shattering the previous record for a Notre Dame quarterback by an astonishing 61 yards.

Boston College would score only once more, but Notre Dame was far from finished. Senior linebacker Nyles Morgan forced an Eagles fumble at their own 35-yard line, which Crawford recovered. Following yet another Wimbush rush to position the Irish just shy of the goal line, junior running back Dexter Williams found the end zone. Just 10 seconds later, Crawford made his second interception of the day deep in Eagles territory, putting Notre Dame in prime position to score. They did so, as Williams added another touchdown to the Irish tally.

At the final whistle, the Irish had triumphed 49-20 and racked up an astounding 515 yards on the ground. This was the most since 1969, and set a modern Notre Dame record for yards per attempt with 10.1. Adams and Wimbush also made history as the first modern Irish pair each to rush for over 200 yards in a game. Although the passing game was held to under 100 yards, Kelly supported his quarterback. “We know that he’s a great competitor and, even through some adversity, he’s going to keep fighting, and our guys love that,” he stated. “It really creates a positive feeling on the sideline when they know they’ve got a guy who’s never, ever going to back down.”

Notre Dame returned to South Bend with not only bragging rights but the Frank Leahy Memorial Bowl. Named after the legendary head coach of both schools, the Leahy Trophy is presented to the winner of the series after each game. Until the next Holy War, the Irish proudly retain the title of best Catholic team in the FBS.