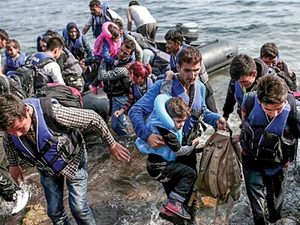 SEEKING REFUGE Syrian refugees, displaced by violence, hope for better lives ahead as thye emigrate to other countries.

Should we welcome them with open arms?

Debate across America is swirling around this central question related to the Syrian refugee crisis. President Obama has said that 10,000 refugees will be permitted entry into the U.S. over the next year.

Opponents of the plan have said that the refugees pose a potential domestic security threat, as 13 percent of the refugees have positive feelings towards ISIS, according to The Clarion Project, a non-profit organization that seeks to expose the dangers of Islamic extremism. Those who favor the prevention of refugees crossing American borders have proposed the establishment of safe zones in the Middle East.

People in favor of allowing the Syrian refugees to enter the country have argued that there is a moral obligation to protect and foster the refugees, who have undergone tremendous strife in their homelands.

Notre Dame’s leadership and the campus community have presented a public voice on the issue, as Notre Dame’s President, Rev. John I. Jenkins, C.S.C. released a statement prior to Thanksgiving as a proponent of welcoming the refugees.

“As we pause now at Thanksgiving to express our gratitude to God for the blessings bestowed so generously upon the United States of America, let us welcome into our midst Syrian refugees forced by unrelenting violence to flee their homes,” Jenkins wrote.

Additionally, Jenkins addressed the Paris terrorist attacks, largely believed to be sponsored by ISIS. Jenkins believes these attacks should have no bearing on the decision to allow the Syrian refugees to enter the U.S.

“We must not be cowed by terrorists into turning our backs on our Syrian brothers and sisters, but instead — and in the name of Our Lady of Refuge — share with them our bounty and protection,” Jenkins said.

Notre Dame’s student government also hosted a dinner in the Morris Inn to discuss the issue with over 135 students, faculty and refugees from Iraq and South Sudan, according to The Observer. The dinner provided an open forum for discussion, especially focusing on religious persecution and how it relates to migration.

“It’s the perfect time to be having this conversation, with all the political rhetoric and the fear-mongering that we’ve been exposed to since the Paris bombing,” Barbara Szweda, former director of both the Notre Dame Immigration Clinic and the Notre Dame Legal Aid Clinic, told The Observer.

The debate will not be resolved overnight, but many associated with Notre Dame have been prominent in sharing their thoughts regarding the topic.