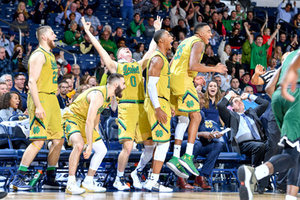 Despite the finish, the Notre Dame senior class will still leave on a high note. They are the winningest class in program history. Over the course of four seasons, the current seniors won 103 games, six more than the next best class.

In the 2014-2015 season, the team recorded a record 32 wins, won the ACC Tournament, and reached the Elite 8. In that game, Notre Dame lost by two to the then-undefeated Kentucky Wildcats.

The following year, the team notched up another 24 wins. They finished fifth in the ACC during the regular season but pulled out some more tournament magic. They beat Michigan in the first round of the NCAA tournament and then defeated Stephen F. Austin State University and Wisconsin in dramatic fashion, earning them another trip to the Elite 8.

Last year, the Irish went 26-10. They finished third in the ACC and made the final of the conference tournament.

This season, Notre Dame faced countless injuries including those to senior stars Bonzie Colson and Matt Farrell. The duo still finished their careers with over 1,000 points each (Colson 1,632 and Farrell 1,097). Colson also ended #8 on the all-time rebounds list with 900.

“When you have good seniors like that, they help the coach,” said Head Coach Mike Brey in a press conference this season.

With so many veterans leaving and so many promising recruits on the way, it remains to be seen where the Irish will go from here and what new legacies will be created. One thing is for sure though: the class of 2018 will not soon be forgotten.