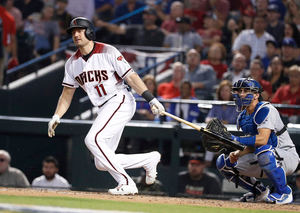 This October, A.J. Pollock, Notre Dame outfielder from 2007-2009, had the opportunity to do something millions of kids dream of — play in the MLB postseason.

His Arizona Diamondbacks faced the Colorado Rockies in the National League Wild Card Game on Oct. 4. Pollock went 2/5 at the plate that night, registering a clutch two-run triple in the bottom of the eighth inning. It pushed the Diamondbacks’ lead to three, and they won by a final score of 11-7.

In the NLDS versus the Los Angeles Dodgers, Pollock notched up one hit, one RBI and two runs scored. The Dodgers swept the Diamondbacks in three games and would go on to win the National League.

Over the course of the year, the Arizona centerfielder tallied 14 home runs and 49 RBIs, making 2017 one of his best offensive seasons ever. He made just one defensive error in 109 games, good for a .995 fielding percentage.

At Notre Dame, Pollock had a .363 batting average, 41 doubles, 10 triples, 17 home runs, 122 RBIs and 60 stolen bases, according to a recent Notre Dame press release. He was a three-time All BIG EAST selection, and he owns the Irish record for stolen base percentage (minimum 35 steals) with a .870 success rate.

Pollock was drafted by the Diamondbacks #17 overall in the 2009 MLB Draft, and he saw his first major league action in 2012.

2017 was the last year of Pollock’s two-year, 10.25 million-dollar contract. He and the Diamondbacks will go through the salary arbitration process (i.e. contract negotiation) this offseason.