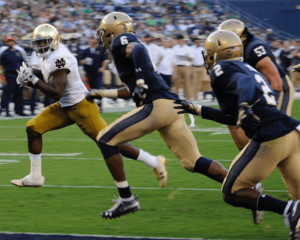 Coming off a bye week following a 7-0 start to the season, the Fighting Irish found themselves ranked No. 3 in the Associated Press Top 25 and knowing full well the task ahead. Wins in all five remaining games would likely mean the program’s inaugural berth in the College Football Playoff; anything else — even with just one loss — and Notre Dame would find itself shut out of the sport’s biggest stage wondering what could have been.

The stretch began with a trip to sunny San Diego, California — a state in which the Irish have been winless since beating USC in 2012 — to renew the historic rivalry with the United States Naval Academy. Navy stands as Notre Dame’s most historic opponent, with the two schools having met annually since 1927.

The opening-drive struggles common in the first seven weeks appeared once again in Notre Dame’s first drive against Navy. Junior quarterback Ian Book connected with senior wide receiver Miles Boykin for a 10-yard completion, but Boykin fumbled — just Notre Dame’s second lost fumble of the season — to give possession to the Midshipmen in Irish territory. The defense stood tall, getting the ball right back to the offense after forcing a turnover on downs on Navy’s first offensive possession.

What followed cemented why Notre Dame was one of the top teams in college football. After the turnover, the Irish took their next two possessions in for touchdowns, culminating with touchdown runs by senior Dexter Williams and sophomore Jafar Armstrong. Sophomore kicker Jonathan Doerer — filling in for senior Justin Yoon on placekicking duties — missed the first extra point but converted on the second, giving the Irish a 13-0 lead after a quarter of play.

The stadium came to a hush midway through the opening quarter when graduate student linebacker and captain Drue Tranquill lay on the field after suffering a high ankle sprain. Unable to apply any weight to his leg, Tranquill was carted off and replaced by sophomore Drew White, who played well in place of the former in just his third career game.

Picking up in the second quarter where they finished the first, Notre Dame continued to move the ball at will. Book was 13 for 16 passing for 124 yards, while Williams notched a pair of touchdowns on the ground to push the lead to 27-0, a margin that would hold until halftime.

Offense was the story of the third quarter, as Navy got on the board first after the halftime break. A 58-yard scamper by junior quarterback Malcolm Perry moved the Midshipmen immediately into the red zone, and three plays later senior Zach Abey — who lined up as both a wide receiver and quarterback for the Midshipmen — punched in a one-yard touchdown to cut Notre Dame’s lead to 27-7 just two minutes into the third quarter.

The Irish answered with a scoring drive of their own on the ensuing possession. Notre Dame moved down to the Navy 5-yard line after long rushes from Book and Williams, but an offensive pass interference ultimately stalled the drive and forced a field goal, which Doerer converted from 30 yards to put the Irish up 30-7.

Both teams alternated 75-yard touchdown drives to end the third quarter. Abey scored his second 1-yard touchdown run of the day to cap off a seven-play Navy drive that consumed 3:38. Nine plays and four minutes later, Notre Dame matched Abey’s run with a 4-yard connection from Book to Boykin.

The fourth quarter featured significantly less offense, as each team scored just one touchdown in the final 15 minutes. Senior fullback Mike Martin rushed in from 33 yards to get the Midshipmen within 15, but a 22-yard strike from Book to Boykin was the final tally in the 44-22 win.

Now at 8-0 and finally past the grueling challenge of the Midshipmen, Notre Dame had checked off one of the season’s biggest tests. Next on the path was a trip to Evanston for the shortest road trip of the month, when Northwestern would host the undefeated Irish.