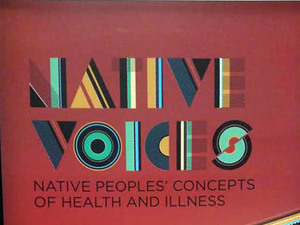 From Sept. 12 to Oct. 26, Hesburgh Library will host Native Voices: Native People’s Concepts of Health and Illness, an exhibition focused on celebrating Native American stories and ideas about medicine and well being.

The National Library of Medicine created the exhibit with the American Library Association. It is currently traveling nationwide on a four-year tour.

Designed as a virtual, self-guided tour, students can learn about the Native American, Alaska Native and Native Hawaiian cultures by accessing one of several available tablets in the exhibit. These tablets contain short video clips of interviews with native people, allowing insight into different cultural, medicinal and social perspectives from all across America.

Although they do share historical experiences and some values, the Native Voices exhibit was created to recognize that all Native people are not culturally homogenous. Medicinal practices, spiritual beliefs, responsibilities of individuals and community are all characteristics that vary from one group to another.

For example, the ancient tradition of the powwow is shared by only some of the Native American communities nationwide. To begin the powwow, elders lead the Grand Entry. Military veterans follow along with respected members of the community. This tradition exemplifies the idea that the community is a source of support and healing for Native American people, as a single person cannot be well if his or her community is not well.

Junior biology major Layton Lamsam was interviewed for the project. He belongs to an organization called Natives in Medicine. Recalling a summer spent attending a program for Native Americans considering medical school, Lamsam recounts, “They wanted to go into medicine to help their tribe, help their people.”

The exhibit highlights themes of individuality, community, nature, tradition and spirituality while emphasizing a balance between traditional healing practices and Western medicine. Native people have retained their concepts of health and illness since ancient times. They are now experiencing a revival of their cultural roots, which is strenghtening these historical ties.

The exhibit can be viewed in the Hesburgh Library Entrance Gallery during fall semester hours.