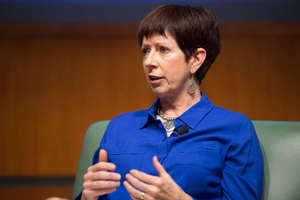 As a young girl growing up in West Chester, Pa. during the 1960s, Ann “Muffet” O’Brien was constantly reminded of what she couldn’t do, especially when it came to athletics and playing basketball with the boys.

Yet, rather than constrain O’Brien and her dreams, childhood naysayers are exactly who gave her the motivation to accomplish everything she was told she couldn’t. For O’Brien, it was always bigger than sports. Since then, Ann “Muffet” O’Brien McGraw has blossomed into a legendary basketball head coach, an outspoken advocate for women and a pinnacle of professionalism.

In April, after 33 years at the helm of the Fighting Irish women’s basketball program, McGraw announced that she had coached her final game. The news sent reverberations all across the basketball world, and her absence on the hardwood will undoubtedly be felt far beyond the sidelines of Notre Dame.

But what is most remarkable about these accolades is that they might even be overshadowed by the influence that McGraw wielded off the court. Muffet wasn’t just a coach at Notre Dame; she was also a neighbor, an active member in the community, a friend, and a mother for her players when she needed to be. She has been outspoken for Kiwanis clubs and local Rotaries in the greater Michiana area, as well as an active participant in Habitat for Humanity builds.

She has spent over 30 years co-chairing and promoting the annual Run, Jane, Run golf fundraiser in support of the YWCA. Most recently, McGraw has helped to organize over 20 food drives, donating thousands of pounds of food to local food banks delivering food to those hit the hardest by the COVID-19 pandemic. She also protested outside the South Bend post office in support of the USPS Aug. 22.

Basketball became a tool of empowerment for Muffet, a medium through which she found herself and her voice. She has always worked to do the same for all of her players, but her arrival at Notre Dame in May 1987 is what gave her the platform and drive to do more for women on and off the court.

McGraw grew into a strong female role model for her players and has always been mindful of all of the women and young girls looking up to her and the team’s example.

The late Pat Summit — former women’s basketball coach at the University of Tennessee — is someone who everyone, especially McGraw, looked up to with reverence and respect during her fights for the women’s game. Summit’s cause was championed by McGraw, and their coaching careers will forever be remembered for their steadfast commitment to their players and their rights. The confidence, integrity and critical thinking skills that McGraw continuously instilled in her players are everlasting, arguably even more so than a winning season or a national title.

While McGraw’s coaching career is over, her tutelage continues. This semester, McGraw is teaching a class in Notre Dame’s Mendoza College of Business entitled, “Sports Leadership: How to Help Teams Flourish.” The class meets once a week on Fridays and is primarily oriented around group work. Students work together in groups to discuss and analyze an issue facing the sports world before presenting potential alleviations to such issues during the Friday class period. The class includes 10 boys and 10 girls.

According to Dan Paglia, a Scholastic editor and a junior business student taking Professor McGraw’s class, “Learning from one of the greatest sports leaders of all time has already taught me a great deal about my own leadership style. Hearing stories of how she developed as a leader and how to maximize the potential of your team has provided an interesting glance into her personal style.”

McGraw built a career on empowering her female players to know their value, especially as leaders and in sports. Cathy Engelbert was a walk-on turned captain on one of McGraw’s first ever Lehigh teams. She’s now the Commissioner of the WNBA after a 30-year career at Deloitte that concluded with her becoming the first female CEO of a “Big Four” firm in the U.S. Engelbert is just one of the hundreds of female lives and voices for which coach McGraw set a proper, value-based foundation.