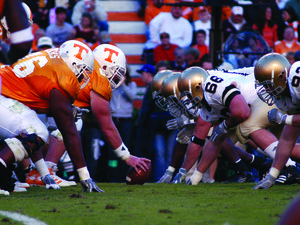 Notre Dame's annual football schedule includes opponents from all across the country, with regular matchups against teams such as USC, Purdue and Navy. But the Irish schedule has historically lacked a significant Southern presence, particularly in the Southeast. Notre Dame didn’t play its first SEC team until LSU came to South Bend in 1970. And while the Irish have occasionally matched up against SEC teams in bowl games, regular season matchups against geographically southern teams have been rare.

This trend, however, is beginning to change. Although Notre Dame football remains independent, the school’s new affiliation with the Athletic Coast Confernce (ACC) has incorporated Southeastern teams into the football schedule, including Florida State and North Carolina this season. Additionally, Notre Dame scheduled the SEC’s Georgia and Texas A&M for home-and-home series beginning in 2017 and 2024.

“As our football schedules evolved with the start of our ACC competition in 2014, we had future games slated with top-drawer opponents in virtually all the major conferences. One exception was the Southeastern Conference, so we are pleased now to be able to check that box,” Notre Dame Athletic Director Jack Swarbrick says.

Notre Dame hasn’t played an SEC opponent in the regular season since they defeated Tennessee in 2004 and 2005 in a home-and-home series.  More recently than that, the Irish have played SEC opponents in bowl games, without much luck.  Notre Dame lost to LSU in the Sugar Bowl in 2007 and Alabama in 2012 in the BCS National Championship Game.  These games have given the Irish an encounter with the exceptional football recruits located in these Southern states.

“Notre Dame played LSU in the 2007 Sugar Bowl and that score was 41-14,“ Lou Somogyi, Senior Editor of BlueandGold.com, says.  “Those guys recruit at just a different level, they get all the speed and just different athletes.”

Scheduling these games, then, can be seen as a way to close the recruiting gap between Notre Dame and its Southern competition.  Notre Dame already has a strong recruiting presence in the Midwest, which may have played a part in abandoning the Michigan and Michigan State series.  The Navy series, as well as the ACC partnership, will allow the Irish to remain prevalent on the East Coast, and the Stanford and USC games ensure a continued presence in California.  A home-and-home has been scheduled with Texas as well for 2015 and 2016.  This leaves the South, and Georgia in particular, as the largest untapped reserve of recruiting talent in the country.

“The balance of power has shifted to the South. It has become extremely pivotal in recruiting and has become a point of emphasis. Florida, Texas and California are the big three states as far as recruiting but Georgia is right up there,” Somogyi says.  “Those areas are very important to maintain a presence. That’s why Georgia was put on the schedule… and now you have Florida State and Miami in the ACC so you can pad that presence as well.”

“We really were excited about opening up a foothold or at least an opportunity to recruit in the Carolinas and recruit that East Coast seaboard from areas where we’ve been before, but adding Virginia, the Carolinas, all the way down to Florida, which for us, we thought it was a great opportunity,” Kelly says. “We think that the recruiting footprint for the ACC was the best situation for us.”

The South and Southeast regions of America have historically been less represented at Notre Dame, and this trend continues.  Only 11 percent of 2014 Irish freshmen hail from these regions, the smallest percentage of any American region (as opposed to 23 percent from the East Coast and 39 percent from the Midwest.)  In general, Catholics are underrepresented in the Southeast as well, with much larger percentages of Evangelical Christians rather than Catholics.

Racist and anti-Catholic sentiments in the South likely contributed for some time to a lack of scheduling in this region. When Notre Dame played its first away game against an SEC team in 1971, Somogyi recalled that the African American players on the team described the game as the worst experience of their lives due to the racist sentiments they experienced. In a 1974 game against Georgia Tech, the Tech crowd taunted Notre Dame players with racist and anti-Catholic insults and threw fish on the field (in reference to Catholics eating fish on Fridays during Lent). Some Notre Dame players said they feared for their safety as the game ended.

This is a period of change for the Notre Dame football program. The partnership with the ACC has allowed the Irish to have a conference home for non-football sports, while allowing the football team to retain much of its scheduling freedom.

A general Southeastern shift in Notre Dame’s schedule will add a new chapter to the history of Notre Dame football.