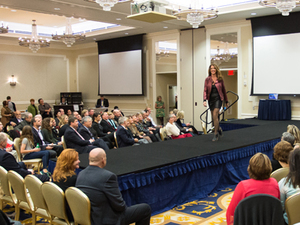 Chris  Stevens (’74), a father of a US Marine, hosted an event Nov. 4 to raise money and support for wounded military heroes. Over 300 students, faculty, ROTC members and members of the South Bend community packed into the Morris Inn ballroom for the event, called “An Evening to Never Forget.”

“I wanted to bring attention to wounded warriors by doing something here. We thought it would be a nice way to bring students together with the South Bend community in an event that honors the people that protect us all,” Stevens says.

Stevens’ son Conor was in the Marine Corps and did two tours of duty in Iraq. One of his son’s best friends stepped on an IED on his first mission and lost both of his legs. “The blanket of freedom that we enjoy has been provided by those who serve…and we have an obligation to support them,” Stevens says.

“An Evening to Never Forget” raised over $3,000 from the raffle alone and included a $10,000 donation to Helping Hands for Freedom, an organization dedicated to helping military families facing injury or loss. Stevens says he hopes this will be the first of many annual benefits for wounded warriors.