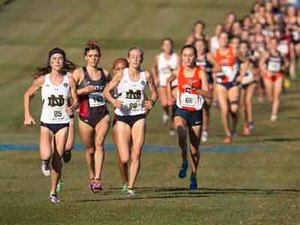 Molly Seidel just keeps running — through expectations, through adversities and through the competition.

To label Molly Seidel’s Notre Dame running career as “decorated” would give the senior far too little credit — especially when this career really only began to gather steam near the end of her sophomore year, in the spring of 2014.

After she endured a freshman year laden with illness and various injuries and a sophomore year with many of the same setbacks, Seidel rebounded and built a junior-year season not often seen in the Irish cross country and track programs.

Seidel’s junior season was one for the record books. Her success in cross country in the fall of 2014 included a win at the cross country National Catholic Championship 5K held at Notre Dame in September, a top-5 finish in the Notre Dame Invitational 5K two weeks later, and a nomination as an All-American, the ninth Irish woman to earn such an honor and the first since 2009.

In the spring 2015 track season, Seidel picked up right where she left off, finishing second in the 3K at the Notre Dame Invitational, winning the 5K at the Razorback Invitational and Meyo Invitational and two ACC Championships in the 3K and 5K. To top it all off, Seidel claimed the first individual national title in Notre Dame women’s track and field history in the 10K, erasing a 50-meter deficit with 800 meters remaining, winning by over six seconds.

“I can’t even describe what that means knowing that [it’s the first national championship in school history],” Seidel says. “It’s such an incredible honor.”

Senior year has provided even more success for the Hartland, Wisconsin native, who has added to an already impressive resume this season. Last month, Seidel was named the U.S. Track and Field and Cross Country Coaches Association (USTFCCCA) Great Lakes Regional women’s indoor track Athlete of the Year. Seidel claimed three national championships in a span of five months, including two in one weekend.

With as much success as she has had throughout her career, however, she stresses that an integral component to her time at Notre Dame is the sense of community that is present, especially among her teammates.

“Having the support of my teammates throughout the struggles and the good times and being able to share the successes with them has been really, really special,” Seidel says.

When asked about her plans after graduation this spring, Seidel was more certain about her desired work field than her career in racing, which still is under consideration.

“It’s really up in the air right now—I’m deciding whether to do a fifth year or not. I have the eligibility for another year of running,” Seidel says. “If I do that I will be a grad student here. If not, potentially going into post-collegiate running, if I get the chance to. Just playing it one day at a time, seeing how it goes.”

As part of her anthropology and environmental science double major, Seidel has taken classes in a variety of fields, especially classes that gave her an idea of what she would do with her degree. So it should come as no surprise that her ideal work immediately came back to running.

“I really would love to go into sports product development — running shoe design. I have studied biomechanics and sustainable business, so I would love to be able to apply that,” she says.

If Molly Seidel’s career so far has been any indication of what would come, the future is shaping up to be memorable and bright. The only question that remains is whether it can run fast enough to keep up.