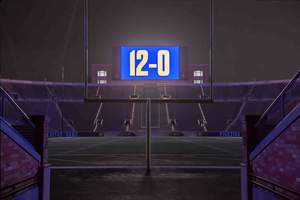 For Notre Dame, the end came inside AT&T Stadium against Clemson in the Cotton Bowl, a first shot in the College Football Playoff that felt too much like recent history for a program built on more vintage stuff. And yet, the 30-3 loss to an eventual national champion made Notre Dame somehow seem both within reaching distance of the sport’s peak and seasons away from its summit, all in one afternoon.

After the confetti had come down, after head coach Brian Kelly had tried to explain how this wasn’t like Alabama from six years earlier, Alohi Gilman sat in a makeshift interview space inside the Dallas Cowboys locker room. His eyes were bright red, colored from the tears that follow disappointing season finales. Notre Dame’s next captain tried to explain why Clemson really wasn’t four touchdowns better, four touchdowns faster or four touchdowns more dominant.

“I think we could have definitely could have won this game,” Gilman said. “That’s my honest opinion.”

Whatever the reality around Notre Dame football may be, it was an unforgettable season that should certainly be remembered for how it ended — but the program’s sincerity made the deepest impression. The two-year rebuilding project that Kelly promised was delivered. The creativity Notre Dame’s coaching staff needed, after replacing a defensive coordinator last off- season and a starting quarterback in-season, had arrived.

Despite evidence to the contrary in the Cotton Bowl, Notre Dame feels as reliable right now as ever under Kelly, with younger coordinators Chip Long and Clark Lea to go with a rebuilding strength program under Matt Balis.

It’s easy to dismiss Gilman’s claim that Notre Dame could have won a game that it lost by knockout, but the Irish recaptured some benefit of the doubt this season, enough that it makes you think twice about what was possible on Dec. 29.

That’s what beating Michigan with Brandon Wimbush to open the season and beating USC with Ian Book to close the regular season can do.

Lea built one of the nation’s most balanced defenses, so solid that Long could make a quarterback change after three straight uninspiring wins to start the campaign. Notre Dame got the surprising supporting stories, too, in

Notre Dame cleared hurdle after hurdle this season before it crashed into the biggest one against Clemson. As much as it would be a mistake to fixate on how it ended, it would be an error to ignore how it started. The work put into running every step inside Notre Dame Stadium on a late June morning doesn’t matter any less because Clemson quarterback Trevor Lawrence torched the Irish secondary. The significance of grinding through August at Culver Academy doesn’t diminish because Notre Dame’s offensive line couldn’t block Clemson’s front.

Yes, the destination can fix into a tidy box score. The journey takes a little more work to understand, a little more appreciation of what it took to earn a shot at the College Football Playoff for the first time. And that’s how best to remember Notre Dame’s undefeated run through the regular season even if it collapsed against Clemson.

The destination mattered. The journey should be appreciated. And one can do both at the same time.

The end was so tough to take for Notre Dame because of what it had invested from the beginning. It’s why Gilman’s eyes were so bloodshot in the hour after the Cotton Bowl, not alone in that reaction, either. In a season that created so many memories, how hard it was for Notre Dame to let go of this run might be the one that sticks the longest.

There’s no getting around the fact that Notre Dame went another year without a national championship, a barren run now for 30 straight seasons. That makes it all a little complicated to reconcile how to feel about a fall that exceeded every expectation but the biggest one. But to spend any time around the program is to see Notre Dame football as healthy as it has been in a long time. Winning at least 10 games in back-to-back seasons for the first time in a quarter century will do that. Making the College Football Playoff will do that, too.

Maybe that doesn’t make the end any easier to take, but it should lace the next beginning with added anticipation. And Labor Day weekend will be here soon.

The views of these authors are not necessarily the views of Scholastic magazine.

Pete Sampson is a staff writer for The Athletic on the Notre Dame football beat, a program he’s covered for the past 17 seasons. The former editor and co-founder of Irish Illustrated, he has covered five different regimes in South Bend, reporting on the Fighting Irish from the end of Bob Davie through the era of Brian Kelly.