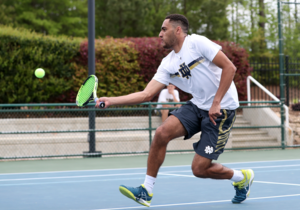 After a 7-0 record to start last season, the Fighting Irish men’s tennis team then dropped five matches in a row in a season that ended in the second round of the NCAA Tournament to rival Michigan. Despite this early exit from what appeared to be a very promising season, Notre Dame maintained high hopes for the future. The loss to Michigan featured only one senior, Brendon Kempin, and gave the young Fighting Irish squad experience that they will inevitably use this season.

Similar to last season, the Irish got a 5-0 start behind the leadership of junior Alex Lebedev and senior Grayson Broadus. This win streak saw Notre Dame defeat multiple top-25 programs, including the Oklahoma, Virginia and Texas A&M. It seemed that the experience of last season was already paying off as the team pulled out these gritty top 25 wins.

With great momentum and a confident squad, the Fighting Irish welcomed Illinois to the Eck Tennis Pavillion for another top-25 matchup. An important part of any collegiate tennis match, the Illini snatched doubles point fairly quickly which meant the Irish would need to win four of the six singles matches. After three singles victories from Lebedev, junior Guillermo Cabrera and sophomore Tristan McCormick, the Fighting Irish needed just one point from the final three singles matches. Despite forcing third sets in all three matches, the team lost a heartbreaker to the Illini by a score of 4-3.

Remembering the downward spiral after a sizzling start last season, Notre Dame quickly bounced back with two dominant wins over Boston College and Ball State. The Irish dropped only one point in these two matches and looked ready to rebound from their first loss of the season.

Led by 18th-ranked Lebedev and helped by the development of sophomores Richard Ciamarra, Tristan McCormick and Will Howells, the Irish once again faced an incredibly tough stretch of the schedule against No. 7 UCLA, No. 12 Columbia and No. 3 Mississippi State. With three top-25 matches, the Fighting Irish have now faced nationally ranked opponents in seven of the twelve matches they have played.

Despite losses to all three in the ITA National Indoors in Chicago, Notre Dame sits at No. 11 in the country with a record of 8-4. The season will not get much easier for the team as they face perennial powerhouses Ohio State, Wake Forest and North Carolina among other difficult contests.

There is still a great amount of promise for the Irish this season as they look to compete for an ACC championship, as well as make a run into the NCAA Tournament.