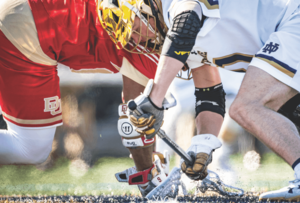 The Notre Dame Fighting Irish finished their 2018 campaign with a disappointing loss in the first round of the NCAA tournament to Denver after a successful season in which they finished 9-6 and defeated Virginia to win the ACC Championship. Heading into the 2019 season, the Irish came determined to build off last year’s performance and make a deep run into the tournament.

The Irish are trying to make their 14th consecutive trip to the NCAA Championships, and it helps that they are returning four of their top five goal scorers from last season, along with all three starting close defensemen and their goalkeeper.

That being said, in the first game of the 2019 season, the No. 7 Irish cruised to a lopsided 19-6 victory over Detroit Mercy at home inside the Loftus Sports Center on Feb. 16. The 19 goals for the Irish were the most scored in a game since defeating Dartmouth by a score of 20-8 on Feb. 28, 2015.

As of February, Notre Dame is 26-5 in season openers under head coach Kevin Corrigan and 32-7 in program history. With the win over Detroit Mercy, the Irish improved to an overall record of 35-5 during the month of February with Corrigan at the helm. That win marked a program-record: a seventeenth straight season-opening victory. Corrigan is the longest tenured men’s lacrosse coach at the Division I level (32 seasons, 30 for the Irish) and is just one of four active coaches to have reached the 300-win mark. His career record for Notre Dame improved to 295-139.

It was a well-balanced effort on both ends of the field for the Irish on Saturday evening. Notre Dame’s defense held Detroit Mercy scoreless for a period of 31:55 from the second to fourth quarters. The Irish offense took advantage of the drought by scoring 12 unanswered goals to put the game away, with the defense forcing 15 turnovers.

Overall, the Irish closed the first half on a 3-0 run to put them up 7-4 at the break. Notre Dame then outscored Detroit Mercy 5-0 in the third quarter and added seven goals in the fourth to lead them to their biggest season-opening victory in the past 26 seasons.

Bryan Costabile led the way for the Irish attack, netting five goals, which matches a career high, to go along with an assist. Senior Brendan Gleason recorded a hat trick, and juniors Brian Willetts and Charlie Leonard — along with freshman Griffin Westlin — each added two goals of their own.

The Irish then suffered a 9-8 defeat to the Richmond Spiders on Feb. 23.

Irish head coach Kevin Corrigan said to UND.com, “I don’t think there is any question that we play the most difficult schedule in the country.” The Irish are slated to take on a schedule that features nine teams in the top 20 of the Inside Lacrosse preseason rankings (and also five in the top 10).

The Irish also have four more road games, all against teams that played in the 2018 NCAA Tournament (Duke, Michigan, Denver and Virginia).

According to Corrigan, “If you look at whom we have played from the fall up to the NCAA Tournament we will have played the best teams in the country. I think that is the challenge and exciting opportunity that our guys look forward to.”

The Irish have all of the pieces in play to make it all the way this season; we will just have to wait and see.