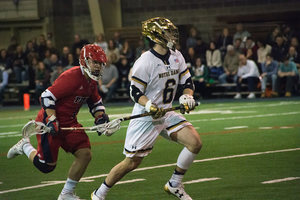 Entering his 30th season at the helm in South Bend, head coach Kevin Corrigan’s Fighting Irish are ranked No. 6 in the 2018 USILA Preseason Poll. Notre Dame also sits in a tie atop the ACC preseason poll with Duke, who was ranked No. 1 in the national preseason poll.

The road ahead will be no cakewalk for the Irish, who face the toughest schedule of any team in the country. Nine of Notre Dame’s 12 opponents are ranked entering this season and seven made the NCAA Championship field last season — including three of the final four teams and defending national champion Maryland.

Corrigan, however, does not shy away from the challenge.

“Between our always-tough conference games and the most difficult non-conference schedule around, we will need to compete at our highest level week in and week out, Corrigan told UND.com before the season. “We love that challenge.”

Notre Dame’s tough schedule began with a pair of home games inside Loftus Sports Center. A hard-fought 10-7 win over Detroit Mercy started the season on a positive note. The Irish continued the momentum with a 11-7 win over Richmond two weeks later, setting the stage for a brutal gauntlet of upcoming games.

After traveling to Maryland on March 3, Notre Dame will return home for three games in 12 days. Denver will visit the Irish on March 10, followed by Virginia a week later and a mid-week game on March 21 against Michigan.

Four of the Irish’s final five regular-season games will be on the road after five of the first six coming at home. Notre Dame will travel to Ohio State and Syracuse before coming home to face Duke then going right back on the road against Marquette and North Carolina. Between the conclusion of the ACC Tournament and the beginning of the NCAA Championship, Army will play Notre Dame in South Bend on May 5. That game will mark the Irish’s regular-season finale as well as the fifth consecutive season that the teams match up, with Notre Dame 3-1 in the series since 2014.