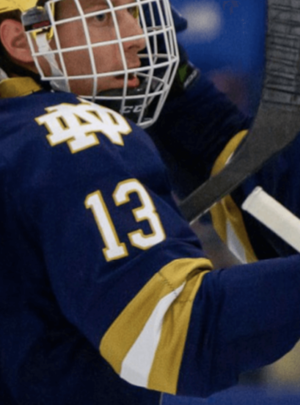 Fall sports are well underway, but now it’s time to get ready for an exciting Notre Dame hockey season. The team started off with their annual exhibition game against the United States

The team is coming in hot at No. 10 on the NCAA official ranking, rising from their previous spot at No. 12. Notre Dame hockey recently announced the new captains, after would-be senior Andrew Peeke, the team’s previous captain, went on to play for the Columbus Blue Jackets. Senior forward Cal Burke now fills the position, with senior defenseman Tory Dello and senior goalie Cale Morris serving as alternate captains. In addition to the new leadership, this year brought in the staggering number of eight recruits: defensemen Ryan Carmichael and Christian DiCesare, forwards Jesse Lansdell, Max Ellis, Jack MacNab, Solag Bakich and Trevor Janicke and goaltender Ryan Bischel.

Jeff Jackson continues his 15th season as head coach and has maintained an impeccable reputation. He has led the team to break records, forging an iconic program. Also returning to the bench are Associate Head Coaches Paul Pooley and Andy Slaggert. However, this season there is a new recruit to the Notre Dame hockey coaching crew: Mike Lawson, former defensemen for the Irish, who will serve as assistant coach this season. Senior defenseman Tory Dello commented on the strong coaching staff: “Our coaches here are some of the best coaches in the country.” He added, “They are without a doubt the most prepared coaches in college hockey” and that “they spend the whole summer finding ways for [the team] to be the most prepared [they] can be going into the season.”

The effectiveness of a coach depends on the talent and hard work of the players. Dello expressed that the team will face a plethora of challenges this season as they have a loaded schedule of “top teams in the country almost every weekend.” However, he says that preparation is such an integral and rigorous part of the Irish program. When asked about any particularly difficult challenges, Dello replied that it is important not to look too far ahead. Because the Big Ten is such a strong conference in college hockey, they cannot afford to pick and choose which battles to fight — victory will come from commitment to the process.

Last year the team defeated Penn State in the Big Ten Championship, crowning them back to back champions. Coming off of this victory, there is a significant amount of pressure on the team to uphold the hefty title and tack on their own championship this season, especially with the influx of new recruits who have not yet experienced the fierce competition and dynamic of a Big Ten tournament. Dello noted that this will not hinder the team moving forward in the slightest. Notre Dame finds itself in a similar position as last year — they have ample young talent who needs to learn the culture and work ethic of the team.

When asked about other goals for the team moving forward from two Big Ten championships, Dello said, “It’s just something that you live by every day, like how we prepare and how we come to the rink every day and practice getting ready for this season. You try not to focus on winning championships, but more on the process that it takes you to get there to give yourself that opportunity and to play our game.” He concluded by adding that they prefer to “let the chips fall where they may,” saying if they focus on the process and on the details on a game-to-game basis, it s will hopefully allow them to bring home another Big Ten Championship.