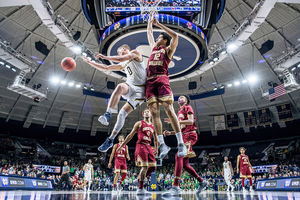 The Notre Dame’s men’s basketball team has dealt with its fair share of adversity and then some. Sitting at 17-12 overall and 7-9 in the ACC, the Irish will need an impressive close to the season and performance in the conference tournament to get a spot in the NCAA tournament.

Having lost ACC Preseason Player of the Year Bonzie Colson, starting senior guard Matt Farrell and promising freshman D.J. Harvey for much of conference play, the Irish have had to dig deep.

The real battle began around the start of the new year when Notre Dame announced that Bonzie Colson would be out eight weeks after suffering a broken left foot in practice.

“We need to embrace this challenge. This program has lost key guys before and we figured out a way to earn a NCAA bid,” head coach Mike Brey said in a team press release.

Brey’s Irish have made seven of the last eight NCAA tournaments. The one time they did not was when they lost Jerian Grant for much of the 2013-2014 season due to an academic violation.

In their first game without Colson, the Irish beat the NC State Wolfpack 88-58 to move to 2-0 in conference play. The team could not celebrate too much, though, as senior guard Matt Farrell only played 15 minutes and left the game with an injury.

Without their two leading scorers, Notre Dame rallied to beat Syracuse by two on the road thanks to a clutch, last-second bucket from Rex Pflueger. The Irish started conference play on a three-game win streak.

The lack of depth soon caught up to them.

Notre Dame lost seven straight. Against the Tar Heels, the Irish came up one point short as T.J. Gibbs’ attempt at the buzzer bounced around the rim and out. In Farrell’s return against Louisville, Notre Dame fell in double-overtime and lost Harvey to a knee injury. Against Virginia Tech, without Farrell once again, the team hung tough only to lose by five.

Since that seven-game losing streak, the Irish have gone 4-2 with wins over Boston College (twice), Florida State and Wake Forest. They fell once again to UNC and lost another home heartbreaker to Miami.

“Obviously we have been dealt a crazy hand on the injury front. We’ve never used it as an excuse ... I think it’s the culture of the program that has a lot of character,” Mike Brey said in a press conference after the win at Wake Forest.

The team sits at 7-9 in conference with two games left in the regular season. They will take on the Pittsburgh Panthers who are winless in the ACC before travelling to Charlottesville to face the No. 1 Virginia Cavaliers, who have only one loss in conference.

Barring any massive upsets, the Irish will be 8-10 in conference which will likely put them in the bottom six of the ACC. That means that they’ll play on the first day of the ACC Tournament for the first time in four years.

Notre Dame fans hope that Colson will return for the conference tournament. Even if he does, though, it remains to be seen if he will be the same player he was pre-injury.

The question on everyone’s mind: Can Notre Dame make the NCAA tournament?

In order to even be in the conversation for a bid, the Irish would likely need to make at least the semifinals of the ACC tournament. Such a showing would give them a win over a top-four team in the ACC and boost their resume.

Looking at their results right now, the Irish have two quality wins that will stand out to the committee: the 84-69 home win versus the now-No. 25 Florida State Seminoles and the dramatic 67-66 win versus the then-No. 6 Wichita State Shockers back in November.

Bad losses include Ball State by three points, Indiana by one point in overtime, Georgia Tech by seven and NC State by 18.

The team and their fans also hope that the committee will value Colson’s return from injury, but much of their decision will likely hinge on how Notre Dame plays in the conference tournament if their star returns to the lineup.

Life on the bubble is nerve-wracking. It should be fun to watch how the team performs in this final stretch. Or heartbreaking. Time will tell.