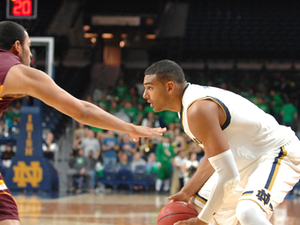 The  Notre Dame Men’s Basketball team kicked off its season with an 88-71 win in an exhibition against Minnesota-Duluth on Saturday, Nov. 1. The Irish featured four guards in the starting lineup. Senior guard Jerian Grant, playing in his first home game since his suspension, struggled with efficiency, but still managed to record 12 points and 9 assists. Senior guard Pat Connaughton posted a double-double, with 15 points and 11 rebounds. Junior forward Zach Auguste and sophomore guard Demetrius Jackson stole the show, however; Jackson notched 20 points on 6-10 shooting (including 2-3 from beyond the arc), along with four rebounds, two assists and three steals. Auguste, meanwhile, put up 19 points and eight rebounds on 80 percent shooting.

Head Coach Mike Brey is not surprised by how well Auguste and Jackson played against Minnesota-Duluth. According to Brey, no two players looked better in the team’s preseason tour of Italy.

“Both Demetrius and Zach needed to play well during the summer, and I am proud of how they have handled their business,” Brey says. “[They] are both playing with a great deal of confidence right now. I love their mindsets and demeanor.”

Two freshman big men also impressed in their limited minutes in the scrimmage. Forward Bonzie Colson, who earned praise from Brey at practice for his rebounding prowess, pulled down three rebounds in his eight minutes and showcased his defensive abilities with three steals. Meanwhile, forward Martinas Geben was productive on defense in his nine minutes, with a block and four rebounds.

The Irish, who begin the season unranked, will have several chances to make waves this season. Preseason No. 23 Syracuse, No. 9 Virginia, No. 18 Michigan State and No. 4 Duke will all be traveling to South Bend. The Irish followed their win against Minnesota-Duluth with another exhibition win against Lewis, 82-59. They will take on Binghamton on Friday, Nov. 14 to begin the Hall of Fame Tipoff Tournament.