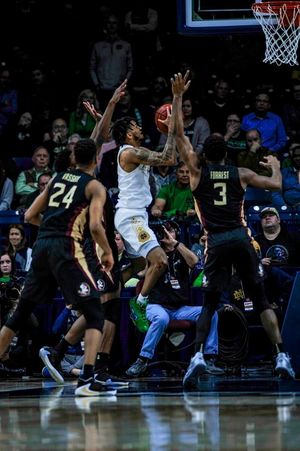 The Notre Dame men’s basketball team ended the regular season 20-12 and 10-10 in the ACC, placing them at seventh in the conference. The Irish had been led by forward John Mooney who is averaging a double-double with 16.2 points per game and 12.7 rebounds per game. The Irish have an additional three players averaging over 10 ppg: TJ Gibbs, Prentiss Hubb and Dane Goodwin.

The team started the season 6-1 before losing seven of their next 12 to sit at 11-8. The Irish lost their opening game at North Carolina before winning six straight home games including an overtime win against Toledo, where Nate Laszeweski made a buzzer-beating three to send it to overtime.

The Irish then dropped their first two games in December to Maryland, who at the time was No. 3, and Boston College. Three games later, the Irish dropped a nail biter to in-state rival Indiana University by a score of 62-60 after Indiana’s Armaan Franklin hit a game-winning three with 15 seconds left.

As January rolled around, the Irish were in grave need of a marquee win, and they were able to get one on the road at Syracuse 88-87. In the game, Mooney put up a season-high 28 points, and it seemed as if that would be the win to turn the season around. Instead, the Irish dropped four of their next five games by a combined 11 points. Two of those losses were to Louisville and Florida State who were ranked No. 13 and No. 5, respectively, at the time.

Against Florida State, the Irish trailed by six with 20 seconds to play and ended up cutting the deficit down to one before missing a game-winning 3-point attempt as time expired. After the game, the Irish were staring at an 11-8 record, and their tournament hopes seemed all but dashed. During the post-game press conference, Coach Mike Brey made comments about the officiating that cost the program $20,000 in fines, but they seemed to light a fire in his squad.

After the rant, the Irish won seven of nine with the two losses coming on the road against Virginia and Duke. It seemed as if the Irish were gaining momentum at the right time, and would have a chance to push their way into the tournament.

On this run, they won two games during the final possession of the game against Boston College and North Carolina. Against North Carolina, Laszewski was the hero, making a 3-pointer with under a second to go to win 77-76.

A little over a week later, T.J. Gibbs was the hero for the Irish with a floater at the buzzer to win on the road to defeat Boston College 62-61. Before the last game of February, six of Notre Dame’s losses had been by one possession or less. Three of the one-possession losses were at home to Louisville, Boston College and Syracuse, while the other three were on the road against Florida State, Virginia and Indiana. The Irish were starting to get back into bubble conversation with only three regular-season games to play.

On Feb. 29, Notre Dame traveled to Winston-Salem to take on 12-15 Wake Forest, a team the Irish beat by 10 earlier in the season. It was a must-win for the Irish to keep their NCAA tournament hopes alive. John Mooney put up 24 points and 17 rebounds, but it was not enough, as Wake Forest defeated the Irish 84-73. The Demon Deacons were led by Oliver Sarr who put up 30 points and 17 rebounds. This was most likely the nail in the coffin for Notre Dame tournament chances, as it added another bad loss to the team’s resume.

The Irish had a chance for a statement win over a top-5 team in Florida State, but similar to the rest of the season, the team was unable to close out a victory and fell by one point in heartbreaking fashion. While the Irish were able to secure a rebound victory over Virginia Tech, lingering thoughts of another blown opportunity were sure to be on the players’ minds heading into the ACC Tournament.

At the onset of the ACC tournament, many experts believed that the Irish would have to make a deep run in the tournament, or perhaps even win it, to have any chance of securing an NCAA tournament bid. After a dominant performance in their first game in the tournament, the ACC decided to cancel the remainder of the games due to concerns over the coronavirus. While fans will never know how the conclusion of the season would have played out, the Fighting Irish were playing their best basketball at the right time and were seeking to make a name for themselves in either the NCAA tournament or the NIT. The efforts of the senior class suggest a bright future for Notre Dame men’s basketball in future seasons.