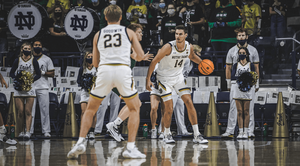 The 2021-2022 Notre Dame men’s basketball season feels like one of the most pivotal of the Mike Brey era. After closing last year 11-15 overall and finishing 11th in the ACC with a 7-11 record, improvement is sorely needed for the team, whose last NCAA Tournament appearance occurred in 2017.

The returning players will remain the key to success this season. The main crop of experienced talent on the team includes Prentiss Hubb, Dane Goodwin and Nate Laszewski. These three have received playing time dating back to their freshman year when the team finished an abysmal 3-15 in the ACC. Point guard Prentiss Hubb was the highest scorer on last year’s team, averaging 14.6 points per game. Additionally, he was the only member of the team to receive preseason honors this year, as he was named to the preseason All-ACC Second Team.

Shooting guard Goodwin and forward Laszewski also made major contributions to the team last year, averaging 11.8 and 13.3 points respectively. This means the three top scorers from last year’s team are also the most experienced with the squad and will need to continue their production in order for the Irish to succeed.

Additional notable returners include Cormac Ryan and Trey Wertz. Transfers from Stanford and Santa Clara respectively, the tandem of guards added some production to the team last year.  Ryan averaged 9.9 points per game while Wertz averaged 8.3. In Mike Brey’s guard-heavy offense, Ryan and Wertz will both need to provide effective minutes for the Irish to compete in the ACC.

He is an important addition to a frontcourt that lacks depth following the departure of Juwan Durham, and will get plenty of minutes this season. The only question is whether or not his impressive play in the Ivy League will translate to the tougher ACC.

The Irish also added two guards and local recruits in Blake Wesley and J.R. Konieczny. Wesley is the higher ranked of the two and has a better chance of being a factor on the court this season, while Konieczny may need a year or two to develop. These two recruits, combined with the graduate transfer Atkinson, provide Notre Dame with much-needed new faces that will have ample opportunity to produce.

The Irish have plenty of chances early in the season to prove this team is different from the teams of the past few years. They travel to No. 11 Illinois for the Big 10/ACC Challenge, face off against No. 10 Kentucky at home and battle at a neutral site with Indiana. All three of these opportunities give the Irish the chance to prove themselves before conference play begins.

Their biggest chance, however, comes in the Maui Invitational. The Irish won this tournament the last time they participated in 2017. Winning the opening round against Saint Mary’s College of California and being competitive throughout the three games will be pivotal to show whether or not the Irish have made the necessary improvements for this season.

The conference portion of the schedule is what you would expect from the ACC: an 18-game grind. At the turn of the new year, the Irish will play Duke and North Carolina back-to-back at home. However, any potential home-court advantage will be largely undercut by the fact that students will be on winter break during this time.

Difficult road tests will come at Louisville and Florida State. However, the Irish only match up once with stronger teams such as Virginia and Syracuse, playing host to both in Purcell Pavilion. Overall, the ACC schedule is difficult as usual, but the dates and locations are relatively favorable for the Irish.

With expectations so high, Notre Dame cannot afford another disastrous season. Kenpom.com ranks the Irish 27th in the country, while ESPN’s Joe Lunardi projects a No. 9 seed for the Irish. A return to the NCAA Tournament would restore confidence in the program. Failure to do so will result in a four year drought, the longest under Mike Brey. It would also mean the initially promising recruiting class of Hubb, Goodwin and Laszewski failed to reach a tournament in their tenure. The time is now for this experienced team to have a successful season.

Since back-to-back trips to the national championship, the Notre Dame women’s basketball team has missed the last two NCAA Tournaments and has a .451 winning percentage. Those two years have seen the retirement of legendary coach Muffet McGraw and the return of Niele Ivey to the Irish bench.

In a season impacted by the COVID-19 pandemic, the Fighting Irish finished with a 10-10 record and were bounced in the first round of the ACC Tournament. Unfortunately, one thing remained consistent from years prior: the team struggled to stay healthy and endured several injuries to key players.

Expectations will be significantly higher for Ivey and the women’s basketball team in her second season at the helm. Notre Dame has long been associated with greatness, and the return of Ivey to South Bend after her brief stint in the NBA promised hope for a return to form.

With only ten scholarship players listed on the Notre Dame roster (the NCAA maximum is 15), returning players will have to take on bigger roles. Head coach Niele Ivey is confident her players will rise to the occasion because eight of those ten players have already recorded collegiate minutes. The Irish return 73% of last year’s scoring, after five players transferred and two more, Destinee Walker and Nicole Benz, graduated.

This season, the Fighting Irish will be led by sophomore Maddy Westbeld, who was named the ACC Rookie of the Year for her efforts last season. She led the team in scoring at 15.2 points per game (ppg) and also contributed 7.9 rebounds and 2.45 assists per game. With an offseason of development and weight training under her belt, Westbeld will be a game changer in the ACC this season.

The Irish also return graduate student Dara Mabrey, the younger sister of former Irish shooting guards Michaela and Marina Mabrey. Known as a sharpshooter, Mabrey will look to build on last year’s performance in which she averaged 11.3 ppg and shot 38.5% from three-point range.

Freshman point guard Olivia Miles, who joined the team with just six games remaining last season after graduating high school early, proved why she was such a highly sought-after recruit. She averaged 9.3 points and 3.5 assists per game, and she showed signs of stardom that head coach Niele Ivey will try to tap into this season.

Juniors Anaya Peoples, who averaged 9.1 points and 6.0 rebounds per game, and Sam Brunelle, who chipped in 8.7 points on 38% shooting from beyond the arc, are also returning to lead this year’s team.

In addition, Katlyn Gilbert, Abby Prohaska and Natalija Marshall will provide depth and leadership this season.

Sonia Citron comes in as a freshman guard oozing potential. At 6-foot-1, Citron has great length for a guard and shows a solid mid-range game that will allow her to crack the rotation. Ivey has mentioned many times that she wants her team to play with tempo, so the addition of a college-ready player  in Citron will allow for starters to get a rest.

Finally, the Irish added transfer Maya Dodson, who averaged just 7.0 points at powerhouse Stanford. Dodson, who will likely play a big role for Notre Dame protecting the paint, finished third in the Pac-12 with 1.6 blocks per game in 2018. In the team’s exhibition game against Division II Emporia State, Dodson scored 24 points on 11-14 shooting with five blocks.

Even after back-to-back down years for the Irish, there is reason for optimism due to the return of several key players and the two talented additions. Further, Ivey will have  newfound experience and comfort on the Irish bench that will surely translate to a stronger performance by her team.

On Dec. 5, the Irish will take on long-time rival and preseason No. 1 UConn before wrapping up the non-conference slate.

Within the ACC, NC State and Louisville both find themselves in the preseason Top 10, while Florida State checks in at No. 14, Georgia Tech at No. 18 and Virginia Tech at No. 22. If Notre Dame hopes to return to the NCAA Tournament this season, matchups against these teams and the rest of the ACC will likely dictate the outcome of the season.

With the experience of Niele Ivey and her eight returners, as well as the addition of Citron and Dodson, Notre Dame fans have reasons for optimism.