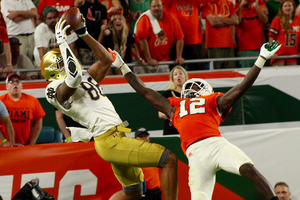 Player of the Game: Te'von Coney

Sitting at No. 3 in the College Football Playoff rankings and in the AP Poll, Notre Dame’s highest rank since they were No. 1 for three weeks in 2012, the 8-1 Irish were in a position to make a statement win and perhaps fly up to the top of the polls. Coming off a 48-37 home win against Wake Forest, Notre Dame was in search of its eighth straight win since losing 20-19 to Georgia on Sept. 9. In the days prior to the game, excitement surrounding the Irish was as high as the Miami temperatures.

“I know our guys are excited about this championship drive that they are on now,” head coach Brian Kelly said in a press conference previewing the game. “This part of the season, obviously in November, all of the teams that are in contention are focused on one game at a time, and it’s single elimination for most teams.”

In the two weeks before that Wake Forest game, Notre Dame had encountered two of those elimination-style games against USC and NC State. The Irish dominated both, holding each to 14 points while hanging 49 on the Trojans and 35 on the Wolfpack. Could they do the same against the 8-0 and No. 7 Miami Hurricanes? During the pregame it appeared unlikely. The first few minutes of game action confirmed: The third time would not be the charm for Notre Dame.

Miami dominated in every sense: offensively, defensively, on special teams and, arguably most importantly, the atmosphere in the stadium. In the final moments before the teams left the field for the national anthem, the Irish walked back to their locker room, crestfallen as if the game soon to begin had already ended in loss. Meanwhile, the Hurricane players were jumping around in excitement to music blasting over the speakers. With the majority of the Miami faithful already in the stadium, the crowd came to life and remained raucous all night, creating likely the most hostile environment that Notre Dame would see all year.

The Irish took the ball first after Miami won the toss and deferred. After a pass from quarterback Brandon Wimbush was tipped and nearly deflected, Notre Dame converted a pair of third downs to keep the drive alive. A deep pass to a wide-open Equanimeous St. Brown — which would have been a touchdown if caught — sailed long and the drive stalled, with the Irish punting and pinning Miami deep inside its own territory. A short drive from Miami followed with no real production, and each team punted once more.

On Miami’s second drive, the Irish forced another third down but this time the Hurricanes converted by way of a 25-yard completion from quarterback Malik Rosier to running back Travis Homer. Rosier scrambled twice on the drive, the second giving the Hurricanes a first-and-goal from the 7-yard-line. Two plays later, Rosier found Braxton Berrios for the game’s first touchdown, giving Miami a 7-0 lead with three minutes left in the opening quarter.

Miami’s well-publicized “turnover chain” made its first appearance of the night moments later. On third-and-5, Wimbush was intercepted inside the Notre Dame 40-yard-line. Two plays later, Rosier ran right up the middle for 16-yard touchdown to push the Hurricane lead to 14-0. Another Irish punt led to three more Miami points as Michael Badgley connected on a 23-yard field goal, extending the lead to 17-0 just 90 seconds into the second quarter.

The offense had a hard time getting anything going early. Wimbush looked like a deer in headlights against the Miami defensive pressure, and Josh Adams averaged just 2.7 yards per carry in the first quarter (Miami opponents’ average was 2.1 YPC).

Wimbush threw his second interception of the game midway through the second quarter. Pinned deep inside his own territory after a punt by Zach Feagles, safety Malek Young snatched the high throw from Wimbush and gave the Miami offense excellent field position in the red zone. The Irish defense held again, and Badgley came on for another field goal to put the Hurricanes up 20-0 with 6 minutes to play in the half. Ian Book entered the game at quarterback for the first time on the ensuing Irish drive, but to no avail. Both sides exchanged punts, with Notre Dame regaining possession at its own 8-yard-line with just a couple of minutes to play in the half.

A touchdown before halftime almost mandatory to salvage any momentum, the Irish finally put together a sustained drive. Book found Stepherson and St. Brown for chunk plays through the air before scrambling himself to extend the drive. With under a minute to play and the Irish facing a third down, Miami called a timeout to discuss their defensive gameplan. Whatever was said worked to perfection, as Book’s next pass landed right in the hands of Trajan Bandy, who ran untouched to the end zone for a 27-0 Miami lead, which became the halftime margin.

To make matters worse, Miami got the ball first after halftime and promptly marched right down the field. The drive spanned 90 yards on just nine plays, including rushes by Homer of 14 and 40 yards, capped off by a 4-yard touchdown rush by DeeJay Dallas.

Down 34-0, Wimbush came back in and appeared reinvigorated, leading the Irish’s first and only scoring drive of the forgettable night. The junior quarterback completed all four of his passes for 69 yards, including a beautiful 14-yard pass to tight end Alize Mack on third-and-4. The touchdown was the first of Mack’s career, and Wimbush rushed for the two-point conversion to trim the deficit to 34-8 with 12 seconds left in the third quarter.

Miami was content to run the ball up the middle for much of the fourth quarter, and the only score of the period came, fittingly, on another 4-yard run by Dallas. That was the final nail in the coffin of the 41-8 beatdown, which saw four appearances by the “turnover chain” and the Miami student section leading the announced crowd of 65,303 at Hard Rock Stadium in chants of “Overrated.”

“I guess [the outcome] was a little unexpected,” left tackle Mike McGlinchey said. “Given the season that we’ve had so far and I think that makes it hurt just a little bit more. But you know, it is what it is. The game happened the way it happened. We just got to go back to work and make sure that we beat Navy next week.”

The loss dropped the Irish to 8-2, while Miami continued its undefeated season, moving to 9-0.

“We felt like we were prepared to play at a high level. We did not. Simply have to coach better and have to play better.” - Coach Brian Kelly