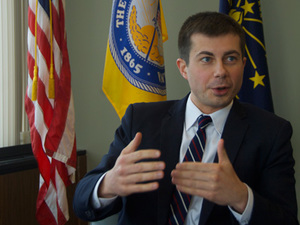 In late January, South Bend Mayor Pete Buttigieg formally filed for re-election. With more jobs, less crime and fewer vacant and abandoned houses in South Bend since the beginning of Buttigieg’s time in office, the young incumbent believes he has a strong case for re-election. He hopes to attack the city’s problems with a similar mindset during a second term.

“I don’t think anything has really changed in terms of what we’re about,” Buttigieg said in an interview with Scholastic. “We’re here in order to bring a new approach to city government, one that’s fresh, one that values innovation and questions habit. That’s an approach that’s served us well over the last four years, and we think it will serve us well over the next four years.”

The successes of Buttigieg’s first term, however, have generated opportunities for further growth. For example, one of the mayor’s flagship projects, the Vacant and Abandoned Properties Initiative, undertook the task of demolishing or rehabilitating 1,000 vacant and abandoned homes in South Bend in 1,000 days. With 301 days remaining, 774 properties have been addressed. But the removal and rebuilding of these homes brings new issues into focus.

Large issues like vacant and abandoned homes, gun violence and economic recovery will always stay at the forefront of mayoral policy. But, Buttigieg says, South Bend has progressed far enough that other issues can come into focus.

“Parks and recreation is a big one,” Buttigieg says. “I had no idea how exciting and interesting that field could be until I really started digging into it. It goes to public art, public health, economic development, preservation of green space. There’s a lot there, and we have room to be a lot more strategic about it.”

The mayor’s vision for South Bend has been shaped by the time he spent in Afghanistan in 2014. The mayor, a member of the United States Navy Reserve, was called into duty and spent seven months serving as an intelligence officer. The time away from South Bend, particularly in Kabul, Afghanistan’s capital, gave the mayor a fresh perspective on the true role of cities.

“[Kabul] is a city where a lot of the things we take for granted here don’t work … Trash pickup, clean, safe drinking water, things we have routinely in our cities in America, they don’t. You can see how it affects people, to not to have access to that. I believe that governments in general, and cities in particular, exist in order to take care of the basics so that people can concentrate their efforts on what is really meaningful to them in their lives.”

Though South Bend already helps provide these basic needs to its residents, Buttigieg believes there is always more the city can do to help its residents achieve their goals. He cites a theory outlined in economist Edward Glaeser’s “Triumph of the City” that suggests that cities have the unique ability to generate chance encounters between like-minded people that increase their creative potential.

“That’s kind of the next level, finding out what we can do to not just take the basics off the table … but also proactively helping people by creating the places and the spaces where that kind of thing can go on,” Buttigieg says.

Buttigieg sees Notre Dame as a valuable part of this growth. He believes the connection between South Bend and the university is special within the landscape of American college towns.

“The relationship between South Bend and Notre Dame is the envy of a lot of college towns,” he says. “I was just at the US Conference of Mayors last week, and talking with other mayors of cities with universities, you can definitely feel the difference.”

The mayor believes this close bond can be an asset to Notre Dame students, who can use the community around them to get the most out of their time in South Bend.

Despite this healthy relationship, Mayor Buttigieg finds there is always room for improvement, much of which can come through productive dialogue with the leader’s of Notre Dame’s student government.

“Alex Coccia was the first student president to really engage us closely,” Buttigieg says, “and I think it really set a great tone. I’ve missed, unfortunately, a lot of Lauren and Matt’s tenure because I was away, but they continue to have that vision of engagement. I hope whoever comes in next will share that vision as well.”