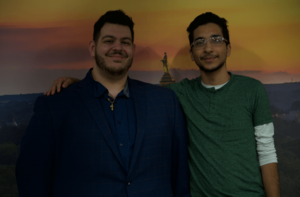 As minority students with no prior student government experience, Mario Markho and Charlie Ortega believe they represent “the people’s ticket.”

“This is my brother,” Ortega said of Markho.

The two met at a scholars program the summer before their first year at Notre Dame, and both are members of the Balfour-Hesburgh Scholars Executive Board. Markho and Ortega say they balance each other out and formed a bond almost immediately. While Markho manages the campaign’s spreadsheets and deadlines, Ortega adds creativity, often reminding Markho to enjoy the ride.

“I’m the artsy guy,” Ortega said. “I definitely add personality to the campaign.”

Practicality is a hallmark of the Markho-Ortega platform. Markho and Ortega feel they can tangibly improve student life on campus by listening to students’ needs and developing achievable solutions.

To assess students’ concerns, Markho and Ortega assembled a team of fifteen students who represent diverse perspectives across campus. Based on this team’s recommendations, they created a platform of ideas both big and small. Their initiatives include increasing the amount of fruit available in the dining halls, improving uniformity in amenities and rules between dorms and making financial aid policies more transparent.

At a time when Notre Dame administrators and student government leaders are struggling with issues of diversity and inclusion, Markho and Ortega could offer personal insight into the experiences of minority students on campus. Both Markho and Ortega are first-generation college students. Markho is the child of immigrants and Ortega immigrated to the United States from Honduras at a young age.

Based on their experiences at Notre Dame, Markho and Ortega believe strongly in the power of education and cultural exchange. The two both say that dialogue cultivates inclusivity and cultural understanding.

“Just sit down and have a conversation with someone,” Markho said.

Markho and Ortega hope to foster better relations between Notre Dame students and the South Bend community. With this goal in mind, their goal is to implement the St. Benedict Joseph Labre Program, based off of a similar program in Markho’s hometown of Toledo, Ohio. The program would send Notre Dame students in vans onto the streets of South Bend, where they’d provide neighbors with food and interact personally with South Bend residents.

“At Notre Dame, we talk a lot about how involved we are in South Bend … but I can’t think of a single program where I’m physically on the streets of South Bend,” Markho said.

Markho reflects that his experiences working at South Bend’s Memorial Hospital and serving on the Balfour-Hesburgh Scholars Executive Board have prepared him for the challenging role of student body president.

“The honest answer is yes, student government would be out of my comfort zone, but [Ortega and I have] proven time and time again that we can be placed in situations where we understand what other students go through,” Markho said.

Markho and Ortega are outsiders who believe they can make positive changes for students. They need to show voters that their passion and ambition can be carried out so that their unique platform can be readily translated into administrative action.