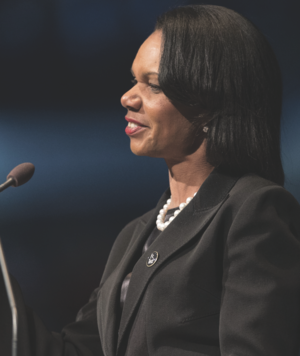 Former Secretary of State Condoleezza Rice visited Notre Dame this October to engage in academic discourse on global affairs as a part of a series of lectures at universities across the country.

Rice graduated from the University of Denver in 1974, initially majoring in music with the goal of becoming a concert pianist. As an undergraduate, she switched her major to political science and later earned a master’s degree in the same subject from Notre Dame in 1975. She is currently on sabbatical from Stanford University’s Graduate School of Business.

During her time on campus, Rice guest lectured at an Introduction to International Relations class, had dinner with student members of the Notre Dame International Security Center (NDISC) and participated in a panel co-hosted by NDISC and the Rooney Center for the Study of American Democracy.

On Oct. 10, Rice gave a talk with NDISC and the Rooney Center entitled “A Conversation with Former Secretary of State Condoleezza Rice.” The event was hosted by Professor Michael Desch, director of NDISC, and focused on Rice’s perspectives on the current state of international order and the path of her political career.

Though the state of global politics is complex and, at times, difficult to approach, Rice managed to create a simultaneously friendly and academic rapport with her audience. Desch began the event by introducing Rice by her many titles, including former Secretary of State and National Security Advisor, Provost and Notre Dame graduate. Rice met the praise with comedic humility, responding: “Just call me Condi.”

The most gripping moment in the talk came when Rice reflected on her role as National Security Advisor following the Sept. 11 terror attacks. She commented that “every day after 9/11 was like Sept. 12.” She claimed it forced America to think about national security differently as it shifted the perspective from potential threats abroad to ones on home soil.

Rice spoke about the role of the U.S. in world politics as a force for good by combating human rights violations around the world. After discussing the need to fight suppression of freedom of speech, Rice claimed that all people “have the DNA for democracy.”

“She’s so knowledgeable, she can pull historical examples from anywhere around the world, but she’s also so personable and calm. Even though her and I have pretty different ideological views on certain security issues, I came away from it understanding her more personally, and really having respect for her intellect and rigor.”

While insight into Rice’s thoughts on global politics during and after her time with the Bush administration was riveting, her personal advice to students interested in political science and public service provided the real highlight of the night.

“If you want to pursue a career in public service or even become Secretary of State,” she said. “You start as a failed piano major.”