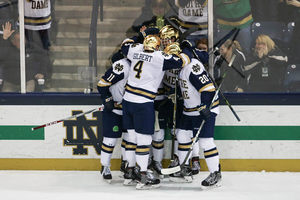 Over the years, the number 16 has remained an important one for Notre Dame athletics.

Katryna Gaither, class of 1997, holds the women’s basketball single-game record for made field goals, going 16-for-20 en route to a 34-point output against Cleveland State in 1995. On the men’s side, Notre Dame has won 16 or more games in 50 of its last 70 full seasons, including 17 of the last 18. And who could forget Notre Dame legend Joe Montana, class of 1979, who, though he wore No. 3 for the Irish, won four Super Bowl titles wearing No. 16 for the San Francisco 49ers?

Earlier this month, head coach Jeff Jackson and his Fighting Irish hockey team embarked on a magical run that nobody in the program will soon forget.

Notre Dame won a program-record 16 consecutive games from Oct. 27, 2017, to Jan. 19 of this year. The streak spanned 87 days without a loss and — at the time of the Irish’s 16th straight win — stood as the longest active winning streak in the nation.

In an additional note of symmetry, the streak also tied for the 16th-longest — in terms of consecutive games won — in NCAA history.

“Right now, I don’t even want to worry about how many wins we have or where we are in the standings,” Jackson added. “I hope our guys can stay focused on the fact that there are areas that we have to improve our game, and if we do that then everything else will take care of itself.”

Sophomore goalkeeper Cale Morris credits the team’s recent success to consistency on defense, having allowed only 22 goals in those 16 wins (1.38 goals allowed/game). “I don’t know if [the team’s defensive approach] is too different [from last year’s Frozen Four team],” Morris said on the Jan. 25 episode of “The Jack Swarbrick Show.” “We did have a great core of defensive players coming back and we had a lot of returners.” “It was kind of lucky on my part,” Morris added with a chuckle.

Even though the run ended just two days later against Wisconsin at the United Center in Chicago, the feat cemented Notre Dame’s place in the standings, as well as in school and national record books.

The Irish are certainly making their presence felt in their inaugural season in the Big Ten after four seasons in the Hockey East Association, reaping the benefits of reduced travel time and additional broadcast exposure. With 13 of the streak’s 16 wins coming in Big Ten play, Notre Dame became the first Big Ten team ever to win their first 13 conference contests of the season. Despite falling to Minnesota after the streak-ending loss to Wisconsin, Notre Dame still holds a healthy 11-point lead in the conference.

“[The Big Ten] has been good for us as team,” Morris said. Playing some of the biggest names out there, anyone can win a game any night, so it’s been a lot of fun playing in those environments.”

Morris also emphasized the importance of the home crowd at Compton Family Ice Arena, especially during the team’s recent success.

“It’s awesome. You could see it Friday night [against Wisconsin], the environment was great. The student section, the band: it’s unlike anything else. They’re incredible, they make the whole place shake.”