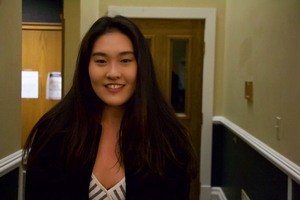 Jenna Kwak wears many hats. A Psychology and Pre-Health major from Seattle, she is also Howard Hall’s Music Commissioner and a volunteer at a local hospital. Her classmates may not realize, however, that Kwak is also a low socioeconomic status student, or in her words, “LSE.”

But Kwak says the “LSE” label does not define her.

“I think a lot of people at Notre Dame separate themselves if they think they’re LSE. I see groups of people who always hang out just [together] if they’re a certain ethnicity or a certain sexual orientation or financial background. What I wish people knew better is that those things come second and yourself comes first,” she says.

As a student from a low socioeconomic background, Kwak admits life is not easy. Hidden fees, such as textbooks, plane fares and going out to dinner can add up quickly for any student, and students with less money must be aware of that.

To cover those fees, Kwak brings money from her summer job, but she says that money is quickly spent on larger expenses like textbooks and storage. Her job at the Writing Center helps pay for smaller expenses.

While Kwak works six to eight hours a week at the Writing Center, she knows some students work more. She says one of her friends worked 12 hours a week last year.

“You already don’t have time for school and homework,” she says. “I saw her [get] to her breaking point of working [too] much.”

As a low socioeconomic status student, Kwak says the larger challenge she faces is not covering her tuition and fees, but handling the coursework of Notre Dame classes.

Kwak says that while she did well in high school, her school did not offer the science classes that would have been helpful for her transition to Notre Dame. AP Chemistry and AP Physics were not offered at her school at all, and AP Biology only began to be offered her senior year.

“There was just no way for me to have the STEM background everyone had,” she says.

She particularly remembers struggling with her chemistry class first semester freshman year, describing the experience as “walking on thin ice.”

While Kwak continued with her pre-med classes, she knows of low socioeconomic status students who have dropped STEM (science, technology, engineering and math) majors after difficult classes, and she thinks more of them would have stayed had they come from better high schools.

Another challenge at Notre Dame is how easy it is to get “stuck in the bubble.” When she is on-campus, she has benefits such as Flex Points and unlimited food at the dining hall. So it is difficult to go home, where she sees people in poverty and must remind herself that the real world requires real money.

Despite the challenges, however, Kwak sees benefits to having a low-income background.

She believes low-income students bring a new perspective and diversity to the Notre Dame campus. For instance, some low-income students are passionate about immigration and have brought other students face to face with real examples of people facing those problems.

And Kwak says her background makes her persistent.

“I don’t get discouraged,” she says. “Even if I didn’t have a science background and I was not doing well in any of my science classes, I wasn’t as discouraged … I just accepted I would be a little slower.”

With the combination of her background and Notre Dame experiences, Kwak is ready to move into the future.

“You just accept your deficits and you move on and find within yourself the courage to move on,” she says. “I think that’s really important in life.”