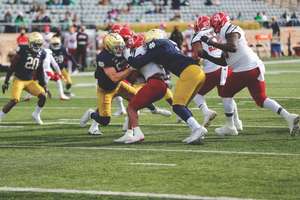 After cruising through the first three games, No. 4 Notre Dame hit its first major roadblock of the season versus Louisville. Against the backdrop of future foe Clemson’s 73-7 rout of Georgia Tech, the Irish (4-0, 3-0) survived against the Cardinals (1-4, 0-4) 12-7. The team extended the FBS-longest active winning streak to 10 games, but with a matchup against No. 1 Clemson looming on the horizon, the win was anything but far-reaching.

In last year’s season opener, Notre Dame played close with a Louisville team in full rebuild under first-year head coach Scott Satterfield for close to a half before pulling away to a 35-17 victory. This year, the Cardinals returned all of their best offensive weapons from a season ago, most notably quarterback Malik Cunningham, running back Javian Hawkins and receivers Tutu Atwell and Dez Fitzpatrick. Hawkins and Atwell set new rushing and receiving records at Louisville a season ago and entered the 2020 season as future NFL draft prospects.

Saturday afternoon, Notre Dame’s defense rebounded from an uncharacteristic performance against Florida State and completely shut down the Cardinals’ explosive offense. Cunningham threw for just 118 yards and a touchdown, Atwell had seven touches for a meager 40 yards, and Hawkins gained 79 total yards on 18 touches. Notre Dame gave up just 219 total yards for the game and held Louisville to a 3-for-9 third down conversion rate.

The Irish trailed 7-6 with a little over seven minutes remaining in the third quarter to a team winless in the ACC that had given up over 34 points per game over their previous four games. But, Ian Book secured the game-winning touchdown on a nifty 13-yard scramble on third and eight late in the third quarter. Book’s final line was 11 of 19 for 106 yards. Notre Dame’s leading receiver was graduate transfer wideout Ben Skowronek who had two catches for 28 yards in his return to action, the most important of which was a 12-yard gain on a critical third and long on the game’s final drive.

Entering the game, the Irish were ranked in the top five nationally in rushing yards and touchdowns per game as well as yards per carry. Unsurprisingly, the ground game solidified the win against Louisville thanks to 232 team rushing yards. Kyren Williams had 127 for his third game out of four with over 100 rushing yards. Williams, the former early enrollee, has gone from redshirting a season ago to being the centerpiece of one of the best rushing attacks in all of college football. He and freshman Chris Tyree have developed into a combo that defenses will struggle to contain moving forward.

While Notre Dame has one of the best offensive lines in college football, it is greatly assisted by one of the deepest tight end rooms in the country. Irish offensive coordinator Tommy Rees has enjoyed the liberty of running multiple tight end sets through the first four games of the season thanks to the trio of senior Brock Wright, junior Tommy Tremble and freshman Michael Mayer. Tremble’s performance has been outstanding, particularly in the blocking game, but Mayer and Wright have also impressed in their first seasons playing big snaps.

Notre Dame’s highlight of the game was the 14-play, 57-yard final drive that ended with a Book kneel for the win and featured three third-down conversions. The drive drained the final eight minutes off the clock, wrapping a neat bow around a game that was more uncomfortable than it should have been.

The Irish won their 22nd straight inside Notre Dame Stadium and 28th straight against an unranked opponent, but they did so without taking the jump in the passing game that has been necessary since the start of the season. Even if Louisville gave Notre Dame some trouble, four games into the season there’s no arguing that the Irish defense, offensive line, tight ends and running back units are elite.