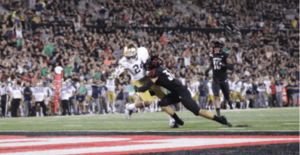 Fresh off a trip to the College Football Playoff, Notre Dame football entered the 2019 season ranked No. 9 in the AP Poll with little noise surrounding their week one matchup with Louisville on Labor Day night. The Irish returned a wealth of key pieces from their 12-0 playoff team, regarding both coaching and player personnel. Some question marks remained as head coach Brian Kelly and the rest of the Irish staff prepared to take on a rebuilding Louisville team featuring a brand-new head coach in Scott Satterfield after an abysmal 2-10 showing in 2018.

The season opener against Louisville began the 30th season since Notre Dame last won a national championship, and in recent years the Irish have not achieved the acclaim or nationwide respect that players, coaches and fans alike feel is deserved in spite of last year’s beat down against Clemson. Notre Dame is labeled a good team, a level below a great team. The 30-3 loss to freshman quarterback Trevor Lawrence and the Tigers made Notre Dame look like a program that didn’t belong in the big game.

Additionally, training camp brought about some setbacks for the Irish heading into the season, most notably when junior tight end Cole Kmet broke his right collarbone during the first week and junior wide receiver Michael Young broke the same bone the week after. Furthermore, Kelly and defensive coordinator Clark Lea knew that they would need to replace a ton of production on the defensive side of the ball with Te’von Coney, Drue Tranquill, Julian Love and Jerry Tillery, gone to the NFL. Heading into the game against Louisville, the Irish linebackers had practically no real game experience at all and were still competing with one another for reps and playing time.

Yet under Lea’s guidance and with the hopes of increased production over the course of the season, the Irish defense entered Cardinal Stadium with everyone having something to prove. Junior Drew White made his first start at linebacker and finished the game with five tackles, the most out of any other interior linebacker. Graduate student Asmar Bilal also started at linebacker and racked up four solo tackles of his own. Sophomores Jack Lamb, Bo Bauer and Shayne Simon also saw game action, along with junior Jordan Genmark-Hearth.

While the middle of the defense was a cause for concern leading up to Louisville, arguably every other aspect of the team was expected to perform like the playoff team from the year before. Seniors Ian Book and Chase Claypool, along with four returning starting offensive linemen and veteran running backs, made up the offensive attack while an elite defensive line and excellent secondary play nearly canceled out the issues in the middle.

Right off the bat Louisville surprised Notre Dame with its energy and intensity, as Satterfield’s Appalachian State schemes evidently meshed well with the Cardinals personnel. The Irish came out strong, opening the game with a six-play, 75-yard drive that featured a 37-yard Ian Book rush and was topped off by a three-yard touchdown run from sophomore running back Jahmir Smith. A reenergized Louisville answered back and then some. The Cardinals responded with back-to-back scores via redshirt senior Jawon Pass, forcing a Notre Dame three-and-out in between, and pulled out to a 14-7 lead with just over 4 minutes remaining in the first quarter. An 11-yard rush from senior Tony Jones Jr. tied the game at 14-14 at the end of one and later on Book got his own 11-yarder to cap off the first half with the Irish leading 21-14.

It ended up becoming a tale of two halves, as Louisville scored just three points in the remaining 30 minutes of game time thanks to Clark Lea’s halftime adjustments. Notre Dame scored two touchdowns in the second half to ice the game. One score came via a 26-yard throw to sophomore Tommy Tremble, and the other was Smith’s second rushing touchdown of the day from one yard out. While the Irish offense didn’t look stellar, Book threw for 193 yards and a touchdown and also added 81 rushing yards and a score. Claypool caught five passes for 94 yards and the Irish gained 423 total yards. The final was 35-17, Notre Dame.

Opening night proved that the Irish had the pieces and potential to make it back to the CFP. While some questions remained, as they do for nearly every team, Notre Dame played an excellent second half and handily beat a clearly new and improved Cardinals team.