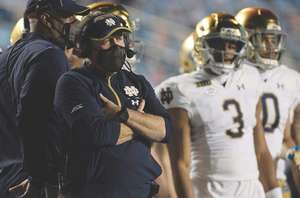 Notre Dame finished the season at 10-2, marking its fourth straight season with 10 wins and its second trip to the College Football Playoff in three years. To add to that, the Irish haven’t lost at home since September 2017, yet we enter 2021 with an uncertainty of where the program will go from here. The Irish closed the season with back-to-back losses by three possessions to two of the best programs in the last decade. They also have to replace the winningest quarterback in Notre Dame history, the team’s best defensive coordinator in recent history and four of five starters on the offensive line. That’s the bad news, but there is also much to look forward to.

Starting with the offense, all eyes will be on the quarterback position. It will be a three, or possibly four-man race for the first string job, something Irish fans haven’t seen since Malik Zaire and DeShone Kizer fought for the starting role in 2016. Redshirt freshman Brendon Clark was the backup for much of the season before suffering an injury which caused true freshman Drew Pyne to step in. These two combined for just six total pass attempts in 2020.

The other two players fighting for the starting role will be Tyler Buchner, the four-star prospect enrolling this February, and graduate transfer Jack Coan from Wisconsin. Outside of the quarterback, the only other area in question is the offensive line, which will only bring back three players with starts under their belt: Jarrett Patterson, Zeke Correll and Josh Lugg. But, there is no need to worry too much because of the way the Irish recruit and develop their linemen.

At the skill positions, the Irish return their two leading rushers, Kyren Williams and Chris Tyree. They also return freshman standout tight end Michael Mayer who improved with each game in 2020. At wide receiver, Avery Davis returns, and behind him, there is a lot of talent and experience starting with upperclassmen Braden Lenzy, Kevin Austin and Joe Wilkins.

On the defensive side, the Irish found a new defensive coordinator in Marcus Freeman from Cincinnati to replace Clark Lea. Freeman brings much anticipation to this Irish defense that will have to replace both defensive ends, star linebacker Jeremiah Owusu-Koramoah and two starters in the secondary. The Irish will return some familiar faces, though, with Kyle Hamilton and Kurt Hinish leading the crew. Depth could pose an issue for a defense that has lost multiple depth players to the transfer portal. At the linebacker position, look for Marist Liufau to continue his upward trajectory as well as players like Jack Kiser and Paul Moala, the latter of whom is returning from an injury that kept him out of the bulk of the 2020 season. One storyline to watch out for at the beginning of the season is how a young secondary performs, but Freeman is up for the task after revamping the Cincinnati defense.

The 2021 schedule is one where the Irish will likely play four preseason top 25 teams: Wisconsin, Cincinnati, USC and North Carolina. These four games are set to be played in a five-game span in the middle of the season. The Irish open the season at Florida State on the Sunday before Labor Day, and the rest of the schedule includes Toledo, Purdue, Virginia Tech, Navy, Virginia, Georgia Tech and Stanford. With a new quarterback under center and a whole new defensive scheme, this spring will be the most intriguing one since after the 4-8 season