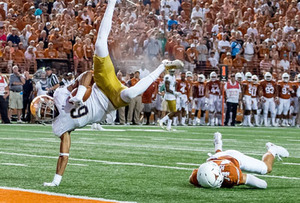 The 2016 Fighting Irish football team kicked off their season with a thrilling yet ultimately heartbreaking primetime battle against the University of Texas.

After battling back from a 17-point deficit, Notre Dame’s hopes were crushed when Texas quarterback Tyrone Swoopes reached across the goal line for a six-yard touchdown to win the game 50-47 in double overtime.

Fresh off a 10-3 season, Notre Dame entered the contest with a No. 10 ranking and College Football Playoff hopes. Texas was unranked to begin the season, and they were looking to avenge the 38-3 blowout the Irish scored over the Longhorns in the 2015 season opener.

After an offseason in which DeShone Kizer and Malik Zaire battled for the starting quarterback job, Brian Kelly elected to play both signal-callers.

Kizer took the first possession of the game, and he quickly rewarded Kelly’s faith. Aided by a 54-yard Tarean Folston run, Kizer capped off the 78-yard scoring drive with a 13-yard touchdown to receiver Equanimeous St. Brown.

That would be the first of a combined 13 touchdowns between the two teams.

Player of the Game: DeShone Kizer

Texas immediately responded to St. Brown’s touchdown with a scoring drive of their own, marching 75 yards in 11 plays. Wide receiver Armanti Foreman caught a 19-yard pass from Buechele to even the score at 7-7.

“When we first started off, if you watched Buechele, he was throwing the deep balls and the first one we had dropped, but he was just making the throws,” Strong said after the game. “You really don’t want to just pull him. You want the rhythm with the game.”

Kelly, on the other hand, committed to a quarterback rotation between Kizer and Zaire. Both of Zaire’s possessions in the first half, however, ended in punts.

The first half ended in a flurry of scoring. Buechele scored on a oneyard run to cap an 88-yard drive and put Texas up by 7, but Kizer quickly responded with a 30-yard touchdown pass to St. Brown to even the game. A one-yard plunge from Swoopes then gave Texas a 21-14 halftime lead.

The second half got off to a disastrous start for the Irish, as Buechele completed a 72-yard pass to receiver John Burts for a touchdown on the second play from scrimmage. The lead stretched to 31-14 after another Texas field goal on their next possession.

Faced with a seemingly insurmountable 17-point deficit, the Fighting Irish began clawing back.

Brian VanGorder’s defense adjusted, switching to a four-man defensive front and moving sophomore cornerback Shaun Crawford from the nickel position to outside cornerback. Kelly, meanwhile, decided to permanently hand Kizer the keys to the offense.

The adjustments paid off immediately.

Kizer ran for a 29-yard touchdown, and after Crawford returned an interception to the Texas six-yard line on the ensuing possession, Kizer hit Torii Hunter Jr. for a five-yard touchdown pass.

After the defense forced consecutive three-and-outs from Texas, Notre Dame finally regained the lead, 35-31, on a 17-yard pass from Kizer to Josh Adams.

“It came from last year,” St. Brown said of the team’s unwavering belief. “No matter what situation we’re in, I think the whole team thinks we’re always going to win.”

Texas answered with a 19-yard rushing touchdown from D’Onta Foreman with just 3:29 remaining to take the lead 37-35. But in one of the biggest plays of the game, Shaun Crawford returned the blocked extra point to the opposite end zone, tying the game at 37-37.

That score remained for the rest of regulation.

The two teams traded touchdowns in the first overtime period, with Texas first scoring on a three-yard Swoopes run and Notre Dame answering with a 25-yard touchdown pass from Kizer to C.J. Sanders.

But in the second overtime period, Notre Dame’s hopes were dashed. They were only able to muster a field goal on their possession. When Swoopes punched in a touchdown from six yards out, the game was over.

It was the most thrilling contest of the year for the Fighting Irish, but they left the Longhorn State with the bitter taste of disappointment.

“Despite the little moral victories, losing’s losing,” Kelly said after the game. “We work too hard and we sacrificed too much to feel good in any way.”

“It takes character and it takes a group of kids that built a strong belief that they can win regardless of the circumstances. There’s a lot of positive things there but the bottom line is we can’t feel good about losing.”