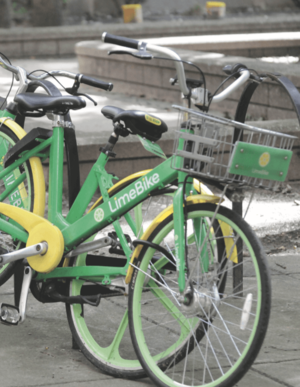 LimeBikes have vanished across campus as Lime moves away from bicycles and towards electric scooters. All of South Bend, as well as Notre Dame, St. Mary’s College and Holy Cross College have been affected as of May by the company’s shifting business model.

The company, founded in January 2017, quickly rose to the top of the expanding world of dockless bike sharing. Originally known as LimeBike, the company changed its name to Lime in May 2018, reflecting an effort to enter the electric scooter market.

LimeBike launched in South Bend in July 2017, the third city with which the company signed a contract. The bikes expanded to Notre Dame, Holy Cross College and Saint Mary’s College the following month. Users could pay and track the bikes via a mobile app. While many took advantage of the convenience the bikes offered, some South Bend residents expressed distress at the bikes being left all over the city, including in front of their homes.

At the end of 2018, LimeBike counted 27,000 active rides in the South Bend market alone, including 5,000 Notre Dame student, faculty and staff. From the university’s perspective, the service contributed to Notre Dame’s goal of sustainability and provided an additional mobility option.

Even so, the company announced in May of this year that it would focus exclusively on e-scooters throughout the country. They removed their bikes from the South Bend area shortly after, donating 100 bikes to the city, according to Jitin Kain, deputy public works director.

As shared electric scooters continue to grow in popularity, so have concerns about their safety. Notre Dame officials have banned Lime scooters on campus for safety reasons.

South Bend’s legal department is working on an ordinance to spell out strict e-scooter regulations. These safety guidelines will include mandatory helmet use and prohibition from riding on sidewalks.

Over the summer, the city also issued a request for information to other rideshare companies that would be willing to provide both bikes and scooters to residents. They have received responses from Uber-owned Jump, San Francisco-based Spin and Charleston-based Gotcha, according to Kain, and are still in the process of evaluating them.

Although the information request was for the city of South Bend, representatives from Notre Dame have been working with the city to examine the various companies and their offered services, especially as it relates to shared bikes — which the university is hoping to bring back to campus soon, according to GreenND. Once the city makes a decision, Notre Dame will look into introducing the selected vendor onto campus.