This month I met a woman I admire very much. She was mistreated constantly throughout her life, yet she had the bravery to candidly share her story with Scholastic.

I interviewed Tasha Vaughn, for our cover story, and spent a wonderful morning at her former home, the South Bend Center for the Homeless. Tasha is frank and fun to be around, and as we walked through the center, she stopped to chat with everyone we passed.

As we delved deeper into her background, however, her story became harder and harder to hear. She told me she was molested as a child and abused in adult relationships. Her mom had died at a young age. Tasha’s sudden brain injury frightened her kids and piled onto an already staggering amount of her own psychological trauma.

Toward the end of the interview, I felt the urge to head for the door; I had enough material and her story left me emotionally drained. (When I finally did leave, I burst into tears in my car.)

I realized during the interview, however, that if I wrapped up and left, it would be exactly the behavior that perpetuates disconnectedness with the people at the Center for the Homeless. So I stayed longer and Tasha told me more. She said she wanted to find a calling in life. She pulled out photos of her 9-year-old daughter and bragged about her outgoing son.

This issue’s cover story only delves into part of her background; the rest is graphic and personal. But Tasha is made up of more than the hardships she’s survived. And I never would have realized that if I’d stopped listening when her story got too heavy.

We’re at pivotal moments in our lives at Notre Dame, solidifying our beliefs and deciding where our skills can make a difference. As I start my tenure as Editor-in-Chief at Scholastic, I want the magazine to promote new perspectives and ways to get outside ourselves.

Don’t get me wrong: this magazine won’t become a chronicle of suffering. Rather, I hope it’s a realistic look at the world – neither sanitized nor dramatized.

In this issue, you can read how it feels to lose a father to suicide, the story of the 100-year-old event that brought Liam Neeson to campus, why Digger Phelps says basketball draws smaller crowds than when he was coach or what it’s like to have dinner with the 2016 presidential candidates. 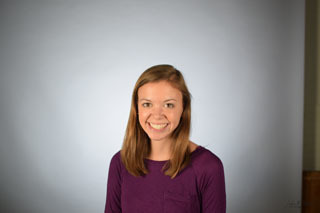