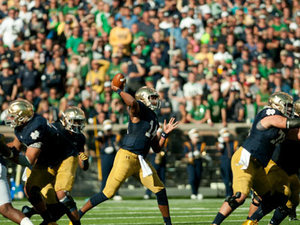 When Malik Zaire was carted off the field at Virginia after suffering a grisly broken ankle in the third quarter, it seemed that the 2015 Fighting Irish football season rode away with him.

DeShone Kizer had other ideas.

Trailing 11.5-point underdogs Virginia by one point with just 19 seconds remaining, the ninth-ranked Irish faced second down from the Cavaliers’ 40-yard line. The redshirt freshman quarterback took the snap, calmly maneuvered in the pocket, and launched a high-arcing rainbow that dropped into Will Fuller’s arms for a season-saving touchdown.

“I kind of blanked out. The adrenaline was pumping as fast as it’s ever pumped before,” Kizer said after the game.

The 19 year-old passer from Toledo, Ohio wasn’t supposed to see significant snaps this year. But following the transfer of last year’s starter Everett Golson and the injury to Zaire, Kizer has found himself the lead signal caller for a team many pegged before the season as a contender for a spot in the College Football Playoff.

The College Football Playoff, of course, is the last thing on anybody’s mind after a heart-rending, blunder-filled loss at No. 12 Clemson. But after three full starts by Kizer, it’s apparent that the hobbling of Zaire needn’t cripple the entire 2015 season.

On this Notre Dame team, the quarterback doesn’t need to carry the load. Gone are the days of Brady Quinn and Jimmy Clausen airing the ball out 40 times per contest in shootout-style games. Standout linebacker Jaylon Smith leads one of the best Irish defenses in recent memory, a unit that stymied the historically confounding triple-option attack employed by Georgia Tech.

Though he struggled against exceptional Clemson cornerback Mackensie Alexander, Fuller has proven himself to be one of the best receivers in the country. And the Irish offense has paired their aerial attack with an equally impressive running game. C.J. Prosise, a converted wide receiver, has averaged over 7 yards a tote behind one of the best offensive lines in the country.

And head coach Brian Kelly has been here before. Dating back to 2006 at Central Michigan, Kelly is an impressive 37-6 (according to FoxSports.com’s Bruce Feldman) when forced to use a backup quarterback as the starter. That track record speaks well to Kelly’s ability to adjust an offense midseason to cater to the talents of his available players.

But the most reassuring thing? Kizer himself. He’s acquitted himself remarkably well, showing the poise and confidence of one far more experienced in the rigors of big-time college football. Kizer has demonstrated a keen understanding of the offense and the arm talent necessary to distribute the ball to the Irish’s many playmakers.

There are, of course, bound to be some growing pains. Both Kelly and Kizer have referenced a footwork issue that has resulted in some one-hopped passes and inconsistent accuracy. But one of Kelly’s favorite qualities about his quarterback is his ability to rectify and move on from his mistakes quickly.

“He can self-correct, which is the great thing about that young man, after making a couple of poor throws,” Kelly said after the Massachusetts victory.

That quality manifested itself in the final period against Clemson. Following a seemingly backbreaking interception with seven minutes remaining, Kizer calmly drove the team downfield twice to eventually score the touchdown that would have tied the game if not for a failed two-point conversion. His fourth quarter stats were eye-popping: 9/12 passing for 202 yards, two touchdowns and the interception to go along with 37 rushing yards and a score on the ground.

Last year, an agonizing road loss to Florida State was just the first domino to fall in what became a lost season. But after the Clemson defeat, Kelly cited his young signal caller as a reason that hope for this year isn’t lost yet.

“I thought he showed great poise in the pocket and I think it just added on to the fact that we’ve got a quarterback that can help us win a championship,” he said.

The road doesn’t get any easier for these Fighting Irish and their young quarterback. Future foes include bitter rival No. 17 USC at home and No. 16 Stanford in the season-finale in California. But the young passer appears undaunted by the challenges ahead.

When asked by reporters why he thought he was so ready to ascend to starting quarterback, Kizer referenced a lesson his parents ingrained in him from a young age.

“My parents have always taught me to prepare for who you want to be, not who you are,” he said.

Fighting Irish fans want Kizer to be the starting quarterback of a College Football Playoff contender. And though spirits may be low following the fall to Clemson, every sign indicates that he is more than capable of being exactly that at season’s end.