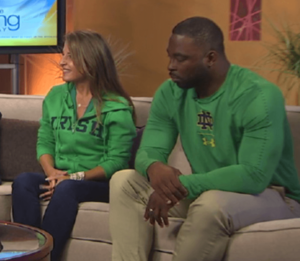 At first glance, the two figures do not seem to have much in common. She is petite and chipper. He is big with an overwhelming stoic presence. The weekend of the Michigan game was just her third trip to campus, while he spent years here as a student-athlete. An unlikely duo, Marie Unanue and Justin Tuck have the same life mission: promoting kindness and giving back.

The two, who became friends through Notre Dame’s Cavanaugh Council, appeared at many events together over the weekend while promoting Unanue’s new children’s book: The Adventures of Phatty & Payaso. The book is a heartwarming ode to friendship in the face of bullying. What makes it unique? The main characters are cats!

The feline protagonists mirror the real life inspiration for Unanue. Her own overweight shelter cat, Phatty, developed a friendship with her neighbor’s sophisticated cat, Payaso, and Unanue felt the story would make a teaching tool for children.

Besides the cast of animal characters, the book also includes a human protagonist who is on the autism spectrum. She wanted her book to promote inclusivity to children along with other social skills such as empathy, grit, curiosity and social intelligence.

For Tuck, a long-time supporter of children’s literacy through his foundation Tuck’s Read, Understand, Succeed, Hope (R.U.S.H.) for Literacy, the story’s ideals were a cause he could get behind. For him, literacy is personal. As a child, his family did not have the means to travel, but his mother told him that he could go to any destination he sought simply by picking up a book. This idea stuck with him his whole life, and when he and his wife started the foundation, he knew he wanted it to be education-based. “In the house that is education,” Tuck said, “the foundation is literacy ... If you don’t have that base, you lose a lot of kids.”

In the importance of literacy, Unanue and Tuck find common ground. Unlike other authors, she had not dreamt of writing a book her whole life. Her own mother could not read or write. Without at-home reinforcement, she struggled with reading and school, despite greatly enjoying both. Writing her own book was a personal triumph, especially because the road to publication was anything but easy.

The Adventures of Phatty and Payaso was a three-year labor of love. Unanue described the arduous process of meeting with several editors and literary agents, all of whom had different visions for the final product. She was told to rewrite — to change her story — to remove her autistic character because children would not be able to relate. After an estimated 70 drafts, Unanue ultimately went with her gut and wrote the book that she wanted to write.

The hardest part of the whole process? Putting herself out there. Unanue faced a lot of scrutiny because she is not a parent, and editors did not believe consumers would want to buy a children’s book from someone without them. Though it took her a long time to work up the courage, she asserted, “Well, I know kindness.”

Unanue’s advocacy for kindness takes center stage; alongside her book, she is promoting the #LetsAllBeKind social media campaign. Unanue encourages children to perform acts of kindness, take a photo with the “Be a

Kindness AdvoCATe” sign found on her website and post that photo online. As a victim of bullying herself, Unanue wants to accentuate the adage: “Treat others the way you want to be treated.” The hope is to bolster kindness as a way of living and inspire childrento do good in their communities.

Tuck, who has taken part in other anti-bullying campaigns, emphasized the need to create dialogue around the importance of kindness, especially on social media which is rife with negativity and bullying. Of his participation in Unanue’s campaign he said, “Hopefully it’s a rallying cry for [people] to feel welcome and loved.”

Both Tuck and Unanue recognize the importance of using their platforms to set examples for and provide hope to others, and never take their eyes off the path ahead.

Unanue has already written a second book about — and titled for — Payaso’s sister, Milagro. Milagro focuses on the theme of female empowerment, with a female protagonist added to her colorful array of characters.

Tuck, who enjoys a new professional path at Goldman Sachs, mentioned his inclination to pen an autobiography — although he made clear that he was in no rush. He hopes to convey all of the transitions in his life: from living in Kellyton, Alabama, to attending Notre Dame, to playing football with the Giants and, finally, to his career in finance. Much like Unanue, Tuck strives to “utilize [his] story as a beacon of light” to assure those who feel disadvantaged that “they are just as qualified to do great things in life” as anybody else.