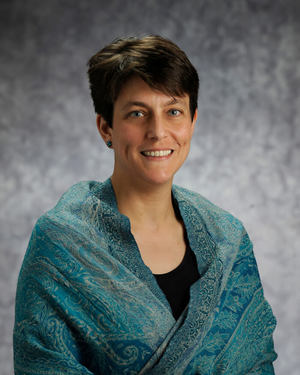 Sarah McKibben is an Associate Professor of Irish Language and Literature, a Fellow of the Keough-Naughton and Nanovic Institutes, and a concurrent faculty member in Gender Studies. She received her undergraduate degree from University of California, Berkeley, a master’s degree from the National University of Ireland at Dublin and a doctorate from Cornell University. She authored Endangered Masculinities in Irish Poetry 1540-1780. Currently, she is working on a second book project, tentatively titled Tradition Transformed: Bardic Poetry and Patronage in Early Modern Ireland, c. 1560-1660.

Though what first drew my interest was a 1773 traditional oral lament attributed to Eibhlín "Dubh" Ní Chonaill, I find bardic poetry — professional praise poetry — really compelling. I find the early modern (16th/17th-century) poetry far more nuanced than earlier critics or the general popular understanding of these poets and their works would indicate. … Ireland is a majority English-speaking country now with only a small percentage of people using Irish daily (though most people learn it in school and know more than they think they do!). But for most of its recorded history, Irish was the language of the majority, from the top to the bottom. From the 12th century to the 17th century, this very polished — but also highly functional — political genre was produced and yet we have very little work that examines individual poems as poems while also attending to their political nature. I'm most interested in how professional poets whose livelihood, community and culture were threatened deployed their very traditional verse toward new ends to critique Tudor-Stuart impositions, defend Irish civility and norms, reinforce their Catholic faith, and reinstate their own role. I find them witty and incredibly acute.

Could you tell me a bit about your comments in the Atlantic article that came out in November 2017 about Notre Dame’s position on birth control?

I appreciate the national attention that has been brought to bear on the administration here at Notre Dame for flip-flopping on contraception and interfering in women’s private medical decisions, for which there has been widespread criticism. Notre Dame’s policies and stances should be stated clearly so that people can decide how to respond — and so that potential graduate students, faculty, staff, and administrators can consider carefully whether they wish to accept positions here. (People often say, ‘Why did you take a job here then?’ when you protest such things, as if you're informed in advance that something as fundamental and private as health care will be dictated by others. Spoiler: you're not!) At present, there’s a lot that remains unclear: what’s going to be covered, the requirement for co-pays (which violates the ACA, I believe, and which stands to put significant financial burdens on those with the lowest incomes in our campus community), how decisions will be made, and so forth. Are Notre Dame’s decisions — the decisions of a university, a place dedicated to the pursuit of knowledge — going to be guided by science or hearsay? Because what I've seen and heard has suggested fundamental misunderstanding of how birth control works, equating it with abortion, which it is not. To be clear, I believe that medical decisions should be guided by respect for women’s autonomy and for our ability to decide things for ourselves in consultation with our doctors.