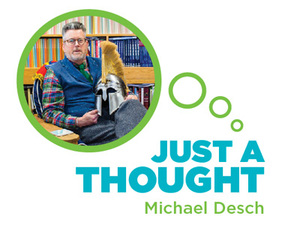 Michael Desch is a Professor in and Chair of the Department of Political Science. He specializes in international relations and has worked at various federal agencies, including the Department of State and the Congressional Research Service.

Through all of your work in various areas of political science and government, have you noticed any common trends?

My commitment, really going back to college and graduate school, was to try to balance on the one hand, doing first-rate academic work with work that also was relevant to the broader concerns of the rest of society. So, it’s been a bit of a struggle because universities are somewhat inward-looking places, and we like to cultivate our own gardens, but I’ve always felt personally it’s more rewarding to speak to issues of broader interest. I also think that universities want to play a role in the larger policy debates that surround us in society. So, I’ve pushed in my own little way to make us a louder voice in those discussions.

As for the Notre Dame student body, if you could make all of them — as a whole — more aware of one issue, what would it be?

I think that the next big step for Notre Dame students is to go from being leaders in business and law — the professional arts — to being intellectual and political leaders in a bigger way than they have been. You already see a small number of students who are committed to politics or even academia, and taking the Notre Dame leadership stamp and moving into those areas, but I think there’s a lot more room for that. We should have a lot more Notre Dame alums in Congress, on the Supreme Court and maybe someday in the White House.

If you could change one thing in American politics, what would it be?

I think people are cynical about politics, and don’t get me wrong, a healthy dose of cynicism is certainly justified. But I think the pendulum has swung too far, and idealistic young people are being sort of shoved away from the idea that public service, i.e. service in politics — either elected or appointed — is a noble calling, and I’d like to see us come to a time again when the term ‘politician’ is no longer a dirty word.

What is your favorite part of getting to work directly with students?

There are so many favorite parts. First of all, just being around young people is energizing; they’re smart, they still have their ideals, they have a lot of their life ahead of them, and a lot of times you feel like you’re working with people who are going to go on to bigger and better things. It’s fun to be a part of it. I also love working with Notre Dame undergraduates. They’re very talented, they’re very interested in a variety of bigger questions, so there couldn’t be a better job in the world, to be honest with you.