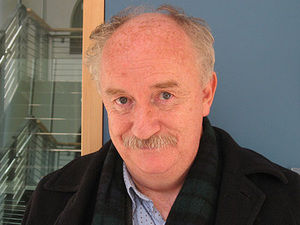 Declan Kiberd is the Donald and Marilyn Keough professor of Irish studies and a professor of English and Irish language and literature at Notre Dame.  He has taught at University College Dublin for 32 years and at Notre Dame for five. He has written primarily about Irish Literature, but also has a strong interest in postcolonial texts and children’s literature, building upon his assertion that children are the ultimate colony --— the ultimate proletariat. He has written numerous articles and many books, and the launch of his most recent publication, Handbook of the Irish Revival: An Anthology of Political and Cultural Writings 1891-1922, was celebrated with a lecture by Irish President Michael Higgins.

What is the most rewarding part of your job?

I would say having daily access to the minds of young people, the rising generation — it’s a great privilege. I find teaching the most rewarding aspect of all the work I do, but also because it involves being taught by the young.

My favorite place in the world is a wooden bridge leading to Dollymount Beach in Dublin…I love it because it was erected with wooden planks on stilts as a completely temporary structure over 100 years ago, and it’s still there… it’s like the human body — the planks get renewed every six or seven years, but it still works. I think of it as an example of successful modernism — provisional and eternal.

Is there a book that exists that you would love nothing more than to change the ending? Which book and how?

Yes! The ending of my favorite book, [The Adventures of] Huckleberry Finn. I agree with Hemingway that the end is cheating. All the stuff about Tom Sawyer’s games with Jim and setting a free slave free — that is cheating. And because I love the book so much, I get mad as hell each time I read the ending. I think he should have stopped it about 20 pages from the end, but it is still my favorite book.